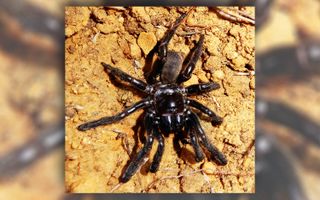 She was known only as Number 16 by the researchers who studied her. Little about her behavior or appearance was out of the ordinary. But Number 16 was special — she was the oldest known spider in the world.

Number 16, a trapdoor spider (Gaius villosus), was first spotted as a wee spiderling in 1974, and appeared in arachnid research surveys conducted at a site in Australia's North Bungulla Reserve, through 2016. As the years rolled by, the spider lived on — through Watergate, the release of the first IBM personal computer, and the debut of the World Wide Web.

But scientists recently discovered that Number 16 had died.

They pronounced her deceased at 43 years old, making her the longest-lived spider to date and unseating the previous record-holder — a 28-year-old tarantula in the Theraphosidae family — which lived and died in captivity, researchers wrote in a study published online April 19 in the journal Pacific Conservation Biology. [10 Things You Didn't Know About Spiders]

"To our knowledge this is the oldest spider ever recorded," study lead author Leanda Mason, a doctoral candidate at the School of Molecular and Life Sciences at Curtin University in Perth, Australia, said in a statement.

"Her significant life has allowed us to further investigate the trapdoor spider’s behaviour and population dynamics," Mason added.

For more than four decades, Number 16 didn't see much more than the inside of her underground lair. Trapdoor spiders build and maintain individual burrows, lining their tunnels with silk and constructing protective lids; they ambush their insect prey from behind these camouflaged doors. The spiders enlarge the holes to fit their bodies as they molt and grow, and when females are brooding spiderlings, they reinforce their burrows' openings with mud plugs for extra protection, according to the study.

The spiders are very possessive of their burrows, and won't move into a neighbor's abandoned tunnel, the researchers wrote. Scientists who study these arachnids in the wild track populations — and follow individual spiders like Number 16 — by checking in on burrows, and noting which ones still have a spider inside.

When the males reach sexual maturity, at about 5 years old, they leave their burrows to find a mate and seal the entrances behind them. But once females dig their burrows, that's where they stay all their lives. Even if a spider's burrow is damaged, the spider will opt for repairing it rather than seeking a new home that was built by someone else, the scientists reported.

Number 16 was part of the first group of spiderlings that study co-author Barbara York Main, a now-retired arachnologist formerly with the University of Western Australia,  observed building their burrows decades ago. (York, who first began the survey, tracked the trapdoor spiders for 42 years.)

Year after year, Number 16 inhabited her underground home. But on Oct. 31, 2016, the researchers found grim evidence suggesting that the spider was dead — and that she probably had a violent end.

A parasitoid wasp had pierced the lid of her lair, and the burrow was falling into ruin, they wrote. Number 16 had likely been attacked and parasitized, a gruesome process in which a wasp implants its egg in a living spider. Then, once the wasp larva hatches, it consumes the spider from the inside out over a period of weeks.

Number 16 may have suffered a grisly ending, but her lengthy life provided researchers with decades of valuable data on the habits and biology of trapdoor spiders, and shows that long-term studies can uncover big surprises about the natural world.