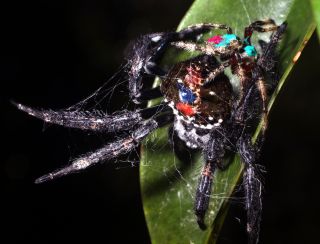 After tying up his much larger mate, a male Darwin's bark spider prefaces sex by drooling on her junk. As one does.
(Image: © Biological Institute ZRC SAZU)

When it comes to sex with a much bigger mate, one type of spider has the problem licked.

And they don't skimp on it, either. The oral attention — which the researchers described as "obligatory," and which they observed before, during and after mating — could occur "up to 100 times" in a single encounter, they said in a statement. [Video: Spider Sex Is Freaky -- Oral, 'S&M' and Cannibalism]

Before this study, oral stimulation was not unheard of in spiders — it also occurs in the Latrodectus genus, commonly known as widow spiders. But it has not been well documented, and this is the first detailed evidence of the activity, the scientists reported.

The Darwin's bark spider exhibited a "rich sexual repertoire," the scientists wrote. Males mating with older females would restrain them with silk bonds. They would also break off "genital plugs" and leave them behind in the female, to prevent them from mating with other males. [Weird and Wonderful: 9 Bizarre Spiders]

And invariably, the male spiders would lubricate females' genitals with saliva — essentially drooling on their mate's naughty bits.

This kind of sexual activity isn't recreational. It's an essential reproductive technique, typically driven by sexual dimorphism — significant physical differences between the sexes.

And the Darwin's bark spider certainly qualifies as sexually dimorphic. Males typically measure about a quarter of an inch (6 millimeters) in body length, while females can be about four times their size, with a body length of about 1 inch (20 millimeters). In the study, the researchers described their spider females as 14 times heavier than the males on average, and about 2.3 times larger.

Gregorič, an evolutionary biologist with the Scientific Research Centre of the Slovenian Academy of Sciences and Arts, explained that unusual sexual behaviors link directly to conflict between the sexes brought about by dramatic size differences.

"Usually, the small and numerous males evolve mechanisms to monopolize females," Gregorič said. These can include guarding females, binding them, using oral sexual contact, even breaking off bits of their own bodies and using them as plugs, to keep other males from penetrating their mate.

Meanwhile, females evolve counter-adaptations to keep the males in check — like eating them. Sexual cannibalism, Gregorič said, is a female mechanism used to control the duration of sex, or to choose among males, which are usually much more numerous than females in sexually dimorphic species.

Prove it all night

But even among unusual mating behaviors, oral stimulation is extremely rare — especially in spiders — and Gregorič and his colleagues considered several possible explanations.

Could they be using oral sex to keep from being eaten? Probably not, the researchers determined. In their observations, they noted that males performed oral stimulation on all females regardless of how aggressive they were. They even orally stimulated females that had recently molted, and were incapable of attacking them.

What was more likely, they concluded, was that oral sexual contact served as a means for the male to signal his fitness as a potential mate. There could also be enzymes in the spider's saliva that benefitted sperm transmission, and potentially impeded the success of sperm deposited by other males.

Further tests would be needed to know for sure what reproductive purpose the prolonged oral stimulation serves. In any case, the female spiders don't appear to be objecting to the attention in the slightest.

The findings were published online April 29 in the journal Scientific Reports.