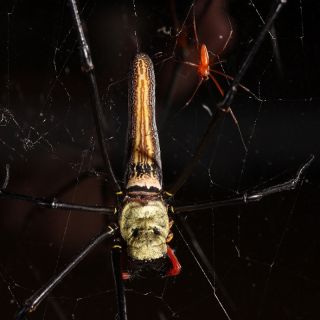 When a male orb-web spider has sex, he is known to cut off his genitals to "plug" his partner, preventing other males from fertilizing her. But scientists recently discovered that females sometimes make their own mating plugs to keep undesirable suitors at bay.

A group of researchers noticed that females of the orb-web spider Nephila pilipes often have a solid, reddish plug covering their genitals. This sex-stopper is distinct from the plug produced from the male's detachable palp, the arachnid equivalent of a penis. [The Weirdest Animal Penises]

To test where these mysterious plugs were coming from, the scientists set up various mating trials in a lab with Nephila pilipes spiders — a highly sexually dimorphic species, in which many smaller males compete for a shot with a few larger, polyandrous females. The researchers found that no plugs were ever formed during mating. Rather, the females exposed to many males in the experiment made the plugs from a red liquid secreted during the egg-laying process.

"It is difficult to explain why females produce such a plug," the researchers wrote in a paper in the journal PLoS ONE. But they argued that while it is in the female's interest to mate with several males, it is not in her interest to be the target of excessive sex after laying eggs. The plugs might then represent "a female adaptation to sexual conflict," they wrote, by preventing superfluous sexual encounters that would cost the female energy without a significant benefit.

Mating plugs are common in other creatures besides spiders and have been documented in primates, catlike civets, lizards, shrimp, bees and even nematodes. These new findings might help scientists understand the different types of selection pressures at work in the production of mating plugs and shed light on the different purposes they could serve.