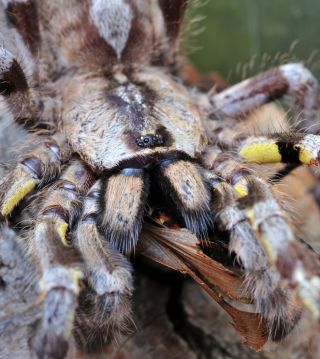 Though tarantulas may look scary, people familiar with the large, hairy spiders know them to be mostly harmless pets. However, some species pack a mean bite, as a new medical case report reveals.

A 45-year-old man went to an emergency room in Switzerland complaining of severe muscle spasms and chest pains, according to the case report. Those symptoms can appear with a number of conditions, said Dr. Joan Fuchs, a junior physician and specialist in venomous and poisonous animals at the Swiss Toxicological Information Center, who reported the man's case in the journal Toxicon in November.

In this case, though, the diagnosis was simple: The man told doctors that the night before, one of his nine pet spiders had bitten his finger while he was feeding her.

"Tarantulas will only bite when severely provoked, or when they are being fed and mistake a finger for their prey, like in our case," Fuchs told LiveScience.

The spider was a member of the species Poecilotheria regalis, also known as an Indian ornamental tree spider, or regal parachute spider. For spider lovers, P. regalis is a gorgeous pet with a legspan of up to 6 inches (16 centimeters) and striking blue, white, yellow and brown markings.

Although the man's bite was initially painless, with only slight redness and swelling, two hours later, he started experiencing hot flashes and sweating, and 15 hours after the bite, severe muscle cramps sent him to the emergency room.

Fuchs and her colleagues wanted to know whether pet spiders were responsible for similar cases. They found that the Swiss Toxicological Information Center had received 10 calls about Poecilotheria bites since 1995. They also found eight cases of Poecilotheria bites in medical journals, and 18 anecdotal reports on blogs run by arachnid enthusiasts. [Photos: The World's Creepiest Spiders]

An analysis of these cases revealed that 17 of the spider-bite victims were men, two were women and seven did not specify their gender. Thirteen of the bites were on people's fingers, seven were on the hand or arm. One person reported a bite on the cheek. Another person got bit on the thigh. A third reported a bite on the shoulder.

In half of cases, the bites were marked by redness and swelling, and 73 percent of those bitten reported moderate pain. Fifty-eight percent had muscle spasms like the man in the emergency room. Scattered throughout were reports of itching, stiff joints, sweating and tightness in the chest.

The frequency of bites is fairly low, Fuchs said, though likely underreported. The fact that only 58 percent of victims experienced muscle cramps suggests the rest of the bites were "dry" bites, in which the spider did not inject venom.

Poecilotheria spiders yield more venom than other large tarantulas, which might be why the symptoms are stronger than in most other tarantula bites, Fuchs said.

The Swiss man was treated for his symptoms with the muscle relaxant and sedative drugs Lorazepam and midazolam. He left the hospital after five hours, but his muscle cramps continued for three weeks. In other cases found by Fuchs and her colleagues, symptoms lasted seven days on average, but some symptoms were reported lasting up to a month.

As for the spider, she was unharmed in the encounter — though the researchers reported she "unexpectedly died two months after the incident."

"I don't think there is really anything to worry about, but awareness is still important," she said.

Doctors should be aware that some bites may cause long-lasting cramps, and that some people keep truly dangerous species, such as the venomous Sydney funnel-web spider, as pets, Fuchs said. Tarantula owners should know their spider's Latin name, because it is important for telling doctors if a bite occurs.

And not all tarantulas bite, Fuchs warned. American species "tend to bombard you with their urticating hair," she said. These hairs are on the spiders' abdomen; when threatened, they rub their legs against their bellies to release a cloud of tiny hairs that irritate skin and cause asthmalike symptoms.

Repeated exposure to the hair can cause allergies, Fuchs said, but even one contact can be highly unpleasant. In 2009, doctors reported a case in the journal Lancet of a 29-year-old man with urticating hairs from his pet tarantula stuck in his eye.