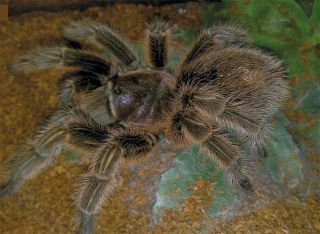 This pet tarantula, a Chilean Rose tarantula, releases utricating hairs from its abdomen to defend against potential predators...or an unsuspecting owner.
(Image: © The Lancet.)

A creepy case of a man who got tarantula hairs stuck in his eye has doctors advising people to wear eye protection when handling the eight-legged pets.

In February 2009, a 29-year-old man visited the St. James's University Hospital in Leeds, England, after enduring three weeks of a red, watery and light-sensitive eye. A dose of antibiotics for what was presumed to be conjunctivitis didn't clear the symptoms.

Doctors at the hospital examined the eye under high-magnification lenses and spotted hair-like projections sticking into the cornea of the right eye.

"When we looked at this guy's cornea, the clear window covering the eye, we saw these little whitish spots and a little black hairy-like thing at the center of each," St. James's Zia Carrim told LiveScience. There were about a dozen hairs protruding from the cornea, a couple of which had gone all the way through the eye's thin covering.

The doctors let the patient know of the hairy findings.

Ah-ha — the patient immediately recalled an incident right before he started having eye troubles in which he was cleaning the glass tank of his pet, a Chilean Rose tarantula (Grammostola rosea). While focused on cleaning a stubborn stain, he sensed movement in the terrarium and so turned his head. That's when the tarantula flicked a "mist of hairs" that hit him in the eyes and face.

Perhaps his pet got scared. To ward off potential predators, this arachnid will rub its hind legs against the abdomen to dislodge hairs into the air. Called urticating hairs, the structures have multiple barbs that help them puncture through ocular and other tissues.

Once in the patient's cornea, the hairs caused an inflammatory reaction called ophthalmia nodosa — a broad diagnosis covering the response of the eye to insect or vegetable material.

The doctors said the hairs were too small to be removed even with tiny forceps. Instead, they treated the eye with topical steroids, which largely cleared up the symptoms. As of August, the patient reported mild discomfort and intermittent floaters, the researchers announced Dec. 31.

The hairs are still stuck in his cornea, and the doctors aren't sure whether they'll ever go away.

"This case highlights the importance of a collaborative approach between doctor and patient in providing good clinical care," Carrim and his colleagues wrote in this week's edition of the journal The Lancet. "The condition described is rare and the correct diagnosis was made only after we discussed the clinical findings with the patient."

The take-home message for owners of pet tarantulas, which the researchers say are becoming increasingly popular: "Avoid handling the tarantulas at close range. If they do handle them at close range, they should wear some type of eye protection," Carrim said.

And if a pet owner happens to get spider hairs in the eye, seek medical attention sooner rather than later, he added.