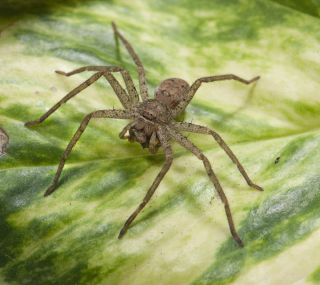 A funnel-web wolf spider, Sosippus californicus. This spider spins a sheet-like web attached to a narrow tube, or funnel. Sitting at the mouth of the tube, the spider waits to strike after feeling vibrations of prey crossing the web.
(Image: © © AMNH\R. Mickens)

If the thought of spiders makes your skin crawl, you might find it reassuring that the chances of being bitten by a spider are smaller than you imagine, recent research shows.

Most so-called "spider bites" are not actually spider bites, according to researchers and several recent studies. Instead, "spider bites" are more likely to be bites or stings from other arthropods such as fleas, skin reactions to chemicals or infections, said Chris Buddle, an arachnologist at McGill University in Montreal.

"I've been handling spiders for almost 20 years, and I've never been bitten," Buddle told LiveScience. "You really have to work to get bitten by a spider, because they don't want to bite you."

For one thing, spiders tend to avoid people, and have no reason to bite humans because they aren't bloodsuckers and don't feed on humans, Buddle said. "They are far more afraid of us than we are of them," he said. "They're not offensive."

When spider bites do happen, they tend to occur because the eight-legged beasts are surprised -- for example when a person reaches into a glove, shoe or nook that they are occupying at the moment, Buddle said.

Even then, however, the majority of spiders are not toxic to humans. Spiders prey on small invertebrates such as insects, so their venom is not geared toward large animals such as humans.

Many spiders aren't even capable of piercing human flesh. Buddle said he has observed spiders "moving their fangs back and forth against his skin," all to no avail. [Creepy, Crawly & Incredible: Photos of Spiders]

Only about a dozen of the approximately 40,000 spider species worldwide can cause serious harm to the average healthy adult human. In North America, there are only two groups of spiders that are medically important: the widow group (which includes black widows) and the recluse group (brown recluses). These spiders do bite people, and if they live in your area, you should know what they look like, Buddle said. But still, records show bites from these spiders are very infrequent.

The bite of widow spiders like the black widow is one of the only well-recognized spider bites in North America, with obvious, unmistakable symptoms, said Rick Vetter, a retired arachnologist at the University of California at Riverside. Signs can include intense pain and muscle contractions, which occur because the bite interferes with nerves in muscles.

Nowadays, deaths from the bite are rare thanks to widow spider antivenom. Before this was developed, however, treatments for black widow bites included whiskey, cocaine and nitroglycerine, according to a review Vetter published this month in the journal Critical Care Nursing Clinics of North America.

Often, black widow and brown recluse spiders are misidentified, and reported in regions where they are extremely unlikely to actually live, Vetter said. For example, In South Carolina, 940 physicians responding to a survey reported a total of 478 brown recluse spider bites in the state — but only one brown recluse bite has ever been definitively confirmed in the state. Recluses are mainly found in the central and southern United States, according to Vetter's study.

"I've had 100 recluse spiders running up my arm, and I've never been bitten by one," Vetter told LiveScience.

The vast majority of "spider bites" are caused by something else, research shows. One study Vetter cited found that of 182 Southern California patients seeking treatment for spider bites, only 3.8 percent had actual spider bites, while 85.7 percent had infections.

And a national study found that nearly 30 percent of people with skin lesions who said they had a spider bite actually had methicillin-resistant Staphylococcus aureus (MRSA) infections. Other things that can cause symptoms that mimic spider bites include biting fleas or bedbugs, allergies, poison oak and poison ivy, besides various viral and bacterial infections, Vetter said.

But spiders are still widely regarded as dangerous to humans, which is generally not the case, Buddle said.

Spiders are good at killing "nuisance insects," which may be more likely to bite humans than spiders, Buddle added. "In the vast majority of cases, spiders are our friends."