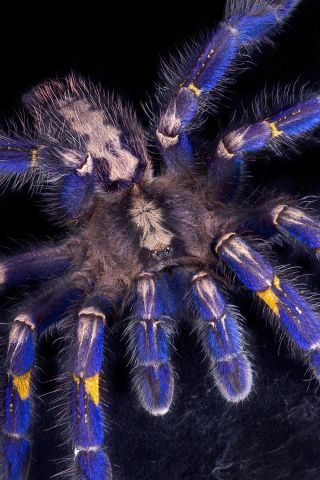 A Gooty Sapphire Ornamental tarantula (Poecilotheria metallica), which served as a source of biological inspiration for the research.
(Image: © Cathy Keifer/Dreamstime)

A brilliant-blue tarantula may give many people the heebie-jeebies, but for a group of scientists, the arachnid was the inspiration for a new hue that could transform digital screens.

The new pigment is called a structural color, and is thought of as superior to dye-based pigments in consumer products, the researchers said. Unlike pigments, structural colors are produced when light interacts with nanostructures that are about the same size as the wavelengths of light — for example, blue or red light, according to the researchers.

"Structural colors are more vibrant and durable than the pigments used in most human-made products," lead study author Bor-Kai (Bill) Hsiung, a biomimicry researcher at The University of Akron, said in a statement.

The challenge in using such colors in technology has been iridescence. "The problem is that most structural colors are strongly iridescent, changing color when viewed from different angles," Hsiung said. "It's beautiful out in nature, but not very functional when we're watching television and we move to a new seat." (Think of a peacock's feathers, which look a little different when viewed from various angles.)

However, in some cases, nature has found a way to reduce iridescence. For instance, the color-producing photonic (i.e., light) structures on some beetles are situated in such a way to make them noniridescent, according to the researchers. The same goes for blue tarantulas' vibrant hair: Nanostructures with a distinct flower-like shape cover the hair and limit iridescence so that the furry creepy-crawly looks a vibrant blue from every angle.

So Hsiung and his colleagues used the tarantula's hair structure to develop a color pigment that is noniridescent and never fades. [In Photos: Tarantulas Strut Their Stuff]

"We are the first to demonstrate that noniridescent structural colors can be produced by highly ordered and periodic photonic structures," Hsiung told Live Science.

Nature had already laid the groundwork for the color pigment innovation, but Hsiung said that using a color nanostructure with a flower-like shape had never been considered in the search to reduce and eliminate iridescence.

People often think human intellect and imagination are all we need to innovate, "but I think that's giving humans too much credit," Hsiung said. "Nature is a perfect source to provide us with that nearly unlimited supply of inspiration."

Hsiung and his colleagues created the new color technology by re-creating the flower-like, multilayer structure of the tarantula hair's color. Though they began with the cobalt blue of the tarantula's hair, the technology can be used for other colors.

The textile industry will likely be an early adopter of the new colorant technology, Hsiung said, because clothing made from noniridescent, structural, colored fibers would maintain the original hue despite frequent washing. Eventually, the fibers could also help to reduce water pollution caused by the heavy dyes used in the manufacturing of colorful cloths.

The same principles can be applied to digital screens' color displays. According to Hsiung, the noniridescent structural color could make screens more energy-efficient while also reducing glare or reflection.

The researchers are now focusing on producing the new color, as they hope to make the material ready for consumers.

Hsiung and his colleagues detailed their research in a paper published online Jan. 19 in the journal Advanced Optical Materials.