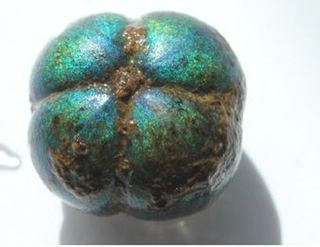 CAMBRIDGE, Mass. — Inspired by the lustrous skin of a tropical berry, new iridescent threads could eventually be woven into clothing that changes color at the flex of a muscle or bend of a knee, say the inventors.

Margaritaria nobilis, a shrubby plant found throughout Central and South American rainforests, sports turquoise-blue berries that glimmer neon green when adjusted under light. The striking berry is thought to attract birds that eat and spread the fruit's seeds; it also caught the eye of physicist Pete Vukusic of the University of Exeter in the United Kingdom, who studies photonics — or the behavior of light — in natural systems.

Vukusic's work focuses on the photonics of colors that appear as light reflects and bounces within microscopic structures, as opposed to colors linked to pigments. His research group has identified such structurally produced color in a wide variety of natural objects, including brilliant blue morpho butterfly wings. These contain microscopic ridges superimposed with nanoscale structures that cause light to bend in ways that appear blue to the human eye. [Magnificent Microphotography: 50 Tiny Wonders]

Curious aboutM. nobilis' distinctive color, Vukusic and his research group examined the berry's skin under a microscope and found elongated blue cells stacked on top of one another. Zooming closer, they found that each cell consisted of thin, double-layered sheets rolled concentrically together, almost like onion skin.

These concentric layers, the researchers determined, caused light to reflect and bounce in complicated ways that ultimately produced the berry's iridescent luster, Vukusic said during a lecture at a symposium on smart clothing here at Harvard University on Nov. 15.

Having identified these color-morphing nanostructures, the team set out to recreate them in the form of fibers that could be woven into clothing.

To do so, the team created extremely thin sheets of double-layered rubber — similar in form to the bilayer in the berry skin — and rolled the rubber onto itself around a thin core. This created concentrically layered bundles slightly thicker than a strand of human hair. Keeping the layers extremely thin was crucial to reproducing the brilliant iridescent display found in the berries, Vukusic said during the lecture. The thinness allowed light to bounce back and forth at many different angles.

Since the thickness of the layers controlled color, the team found it could slightly alter the color of the elastic rubber fibers by pulling on them gently: The fibers turned from red at their thickest to blue at their thinnest, because wavelengths of red light are longer than wavelengths of blue light, Mathias Kolle, a materials scientist at MIT involved in designing these fibers, told LiveScience.

The team imagines such color-morphing fibers could create interesting athletic-wear that changes at the flex of a bicep or the bend of a joint, Kolle said. Alternatively, Kolle suggested creating small novelty patches that could be woven into the knuckles of gloves that would change color when the wearer grasps something.

The methods the team used to create these prototypes — which only measured several inches long — must be modified to reproduce the fibers on large enough scales to be woven into clothing, Kolle said. The team's future work will focus on this scaling-up.

"What we are trying to figure out right now is how to maintain control on the nanoscale at the same time as being able to do it fast and have large throughput," Kolle said.

Aside from creating clothing, colleagues have also suggested alternative applications, such as surgical sutures that change color and indicate to surgeons when they have reached adequate tension around a wound.

Others in the field of fiber technology are excited by the implications of these novel shiny strands.

"This is a very interesting and clever approach," Juan Hinestroza, director of the Textiles Nanotechnology Laboratory at Cornell University who is not involved in this research, told LiveScience. "This investigation provides a new avenue to produce functional fibers and adds to the set of tools and platforms available to create even more multifunctional and interactive fibrous materials."