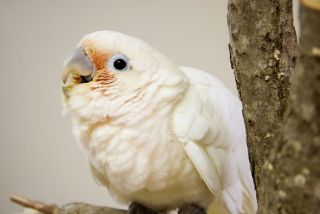 If optimists see the world through rose-colored lenses, some birds see it through ultraviolet ones. Avians have evolved ultraviolet vision quite a few times in history, a new study finds.

Birds depend on their color vision for selecting mates, hunting or foraging for food, and spotting predators. Until recently, ultraviolet vision was thought to have arisen as a one-time development in birds. But a new DNA analysis of 40 bird species, reported Feb. 11 in the journal BMC Evolutionary Biology, shows the shift between violet (shorter wavelengths on the electromagnetic spectrum) and ultraviolet vision has occurred at least 14 times.

"Birds see color in a different way from humans," study co-author Anders Ödeen, an animal ecologist at Uppsala University in Sweden, told LiveScience. Human eyes have three different color receptors, or cones, that are sensitive to light of different wavelengths and mix together to reveal all the colors we see. Birds, by contrast, have four cones, so "they see potentially more colors than humans do," Ödeen said.

Birds themselves are split into two groups based on the color of light (wavelength) that their cones detect most acutely. Scientists define them as violet-sensitive or ultraviolet-sensitive, and the two groups don't overlap, according to Ödeen. Birds of each group would see the same objects as different hues. [Vision Quiz: What Can Animals See?]

The specialization of color vision has its advantages. For instance, a bird with ultraviolet-sensitive vision might have spectacularly bright plumage in order to impress a female, but that same plumage might appear dull to predator birds that see only in the violet range.

The study researchers sequenced the DNA from the 40 species of birds, from the cockatiel to the whitebearded manakin. They extracted DNA from the bases of feather quills, blood, muscle or other tissue. From that DNA, the scientists reconstructed the proteins that make up the light-sensitive pigments in the birds' eyes. Differences in the DNA revealed which birds were sensitive to violet light versus ultraviolet.

"That change is very simple, apparently," Ödeen said. "It just takes a single mutation" in the DNA sequence. While that change may seem insignificant, it can be compared to the difference humans see between red and green.

The researchers mapped the birds' evolutionary relationships using data from their study and others. The color mutation that made bird lineages with violet vision evolve to see in ultraviolet and vice versa occurred at 14 different times in their map, and probably even more among all birds, Ödeen noted.

Why the bird lineages switched their color sensitivity — essentially species of a certain branch on the family tree evolved to have the reverse type of vision — is still something of a mystery. The ability to attract mates while still evading predators could be one reason. Ultraviolet light might also provide higher contrast that makes finding food easier. Other factors are environmental — open spaces have more UV light than do forests, for example. Ultimately, the color sensitivity may be a result of other changes that affect the amount of ultraviolet light the birds' eyes receive.

It seems the evolution of color vision in birds is much less black and white than was once thought.