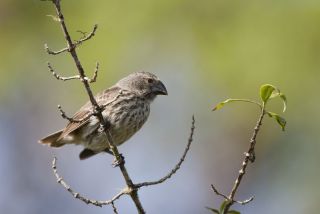 Darwin first studied this Galapagos finch (the medium ground finch) in the 19th century. Now scientists have a map of its genome.
(Image: © Stubblefield Photography, Shutterstock)

Scientists have sequenced the genome of a Galapagos finch that helped inspire Charles Darwin's theory of evolution. Researchers say the birds' DNA blueprint will allow them to examine how natural selection works on the genomic level.

The medium ground finch (Geospiza fortis), one of the species studied by Darwin when he visited the Galapagos Islands, evolves rapidly in response to environmental changes. Previous research found that the finches recently shrunk their beak size in a mere two decades to better equip themselves to eat small seeds after facing competition for resources from another bird.

"These finches are of great historical significance, but when Darwin first studied these birds, he was unlikely to have envisioned how this species would become a perfect model to study evolution in action," researcher Guojie Zhang, of the Beijing Genomics Institute (BGI), said in a statement. "Having the reference genome of this species has opened the door for carrying out studies that can look at real-time evolutionary changes on a genomic level of all of these enigmatic species."

Specifically, the researchers say studying the finch's genetic map could contribute to their understanding of vocal learning in animals.

"Like human spoken language, Geospiza song dialects are stable over many generations, but can change with emigration," researcher Erich Jarvis, of Duke University, said in a statement.

"Having the well assembled draft reference genome of one individual will now allow scientists to determine if this cultural evolution is partly affected by genetics or is all pure cultural transmission," Jarvis added.

The finch's genome, which is nearly a third of the size of the human genome, was sequenced from an individual female bird. The DNA map, put together as part of a collaboration between BGI and Genome 10K, has been made available online through the University of California, Santa Cruz, Genome Browser.