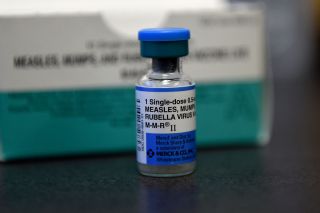 Weeks after a hotspot for anti-vaxxers turned into a hotspot for measles infections, vaccination rates have surged in the area, according to news reports.

Last month, following 50 confirmed cases and 11 suspected cases of the measles, Clark County, Washington, declared a public health emergency. Now, residents of the area are scrambling for vaccinations, according to Kaiser Health News.

The measles virus is extremely contagious but is also considered "extremely rare," because it's easily preventable with vaccines. But an increase in anti-vaccination movements across the country and even in other parts of the world has left children unprotected and vulnerable to the infection.

The outbreak in Washington state is one of three current measles outbreaks in the U.S. There are also outbreaks in New York City and New York state.

Once the vaccine is administered, it takes about 72 hours to confer protection.