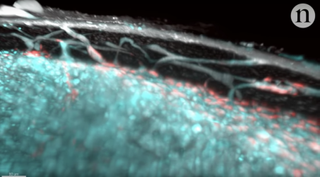 Our bones may be filled with previously undiscovered networks of microscopic tunnels, a new study finds.

These tiny tunnels — spotted in lab mice and traces of it in one inquisitive researcher — may be vital for transporting immune cells out of bones, where they are made.

In the study, researchers found hundreds of previously unknown capillaries — the tiniest blood vessels in the body — in the leg bones of mice. The discovery of something in mice, however, doesn't necessarily mean it exists in humans, and there can often be a long period between an animal discovery and confirmation of the findings in humans.

Not so in this case: One of the (human) researchers decided to jump-start the human studies, so he stuck his leg in an MRI machine and spotted evidence that the tiny bone tunnels might also exist in humans.

The study was published yesterday (Jan. 21) in the journal Nature Metabolism.

Blood cells are manufactured inside bones, in what's called bone marrow. And these blood cells are capable of moving quickly from the bone marrow into the circulatory system. But how blood cells could do this — quickly exit the bones and get into circulation — has been unknown. [The 7 Biggest Mysteries of the Human Body]

An existing first-response medical procedure — known as intraosseous infusion — hinted at the existence of a passageway out of the bone marrow and into the blood vessels, however. During intraosseous infusion, drugs are injected into a person's leg bones, and then, shortly after, enter circulation, according to a video in Nature Metabolism.

To search for the missing microscopic tunnels, the researchers used a chemical that makes mouse bones appear transparent. (The chemical clears the bones of compounds that are opaque, including fat.). With transparent bones left behind, the researchers clearly saw (well, using several different microscopes) hundreds of previously undiscovered capillaries. They named them trans-cortical vessels (TCVs).

Next, the researchers stained immune cells called neutrophils that are made in the bone marrow and observed them moving through and out of these capillaries, further confirming their findings.

The discovery came as a surprise to the team. "You would not expect to find a new anatomical structure in human and mouse bones in the 21st century," senior author Matthias Gunzer, a professor of experimental immunology at the University Duisburg-Essen in Germany, told Live Science in an email.

But Gunzer wanted to know if humans also had these strange capillaries. So, he volunteered himself to find out.

Gunzer underwent an hours-long MRI scan of his leg. In the resulting images, the capillaries in question weren't directly apparent in the image; however, there were "conspicuous holes in the bone tissue," that might be signs of their existence, Gunzer said.

This, together with other data and imaging "made a pretty good point in favor of TCVs also existing in humans," he said.

What's more, another study published last year in Nature Neuroscience found similar networks in the skull that connect to the brain. Their results serve as "independent confirmation of our findings," Gunzer said.

The new findings, if further confirmed, could have multiple implications that are "potentially of great significance", especially in the development of new medical treatments, wrote Christopher Ritchlin, the director of the Clinical Immunology Research Unit at Rochester University, and Iannis Adamopoulos, an associate professor in the department of internal medicine at the University of California, Davis, in a commentary that was published alongside the article. Neither Ritchlin nor Adamopoulos was involved with the research.

In one example, the researchers found that the number of TCVs increase in mice that have rheumatoid arthritis — an autoimmune disorder that wears away the joints — as well as in mice that were exposed to radiation. In humans, both radiation and arthritis are known to damage bones, Gunzer said. So, "if we find ways to stop the formation of new TCVs, this might turn out very helpful for people," he said.