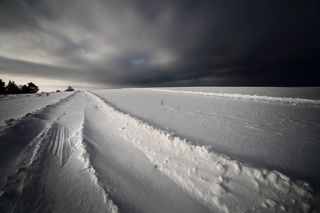 On Sunday, as much of the country plunged into polar temperatures, President Donald Trump took the opportunity to make a dig at climate science on Twitter.

"Be careful and try staying in your house," he tweeted. "Large parts of the Country are suffering from tremendous amounts of snow and near record setting cold. Amazing how big this system is. Wouldn't be bad to have a little of that good old fashioned Global Warming right now!"

Perhaps unsurprisingly for a president who has flirted with the idea that climate change is a hoax, Trump doesn't have global warming's effects quite right. Indeed, even as the globe gets hotter on average, some localities could see bigger winter storms. [The Reality of Climate Change: 10 Myths Busted]

The first problem is mixing up climate and weather. This is a perennial issue in his rhetoric; in 2016, he pointed to an unusually warm day in 1898 as evidence that the globe isn't overall getting hotter. That weather record was set in only two spots, Oregon and Maryland, making it pretty meaningless to the question of climate, which deals in long-term trends the globe over.

And the long-term trend isn't pretty. According to the U.S. National Climatic Data Center, there has not been a single month in which the average surface temperature on Earth has dipped below the 1901 to 2000 average since … 1985. (The National Oceanic and Atmospheric Administration's repository of this data is offline due to the government shutdown, but The Conversation has more detail on the numbers.)

The future of cold

So what about winter storms? They certainly still exist, but climate scientists predict that Americans will experience even fewer cold waves in the future, with "cold waves" defined as six-day periods in which the temperatures are below the 10th percentile of the temperature range for that area. Alaska will see the greatest decline in cold waves, according to the CSSR, while the Northeast will see the least extreme decline.

Snow cover, snow depth and extreme snowfall are also on the decline across the southern and western United States, according to the CSSR. The Northeast is something of an anomaly: Extreme snowfall has increased in parts of the northern United States. Interestingly, the warming climate can sometimes actually trigger extreme snowfall events, because warmer air can carry more moisture. Meanders in the jet stream that channel frigid air down from the Arctic can then create the conditions for monster blizzards. Unfortunately, as climate change alters the polar regions, these jet stream changes may become more common. The result could be a sort of "feast or famine" situation for winter storms: As overall snowfall declines (and parches the already-arid West), some areas — particularly the Northeast — could see more individual extreme precipitation events.

It's worth noting that all of the trends caused by climate change are also overlaid on top of shorter-scale atmospheric patterns. For example, the famous ocean atmosphere pattern El Niño, which involves a warmer-than-usual central or eastern Pacific, alters winter weather across the United States. Typically, it brings wet, chilly weather to the southern half of the country and warmer, drier weather to much of the northern half. As of Jan. 10, the U.S. Climate Prediction Center forecasted that El Niño has a 65 percent chance of forming by the early spring.