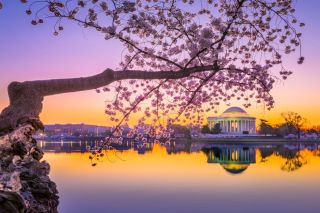 The winter has been so warm that the cherry blossoms in Washington, D.C., are forecast to bloom early, in mid-March, according to the National Park Service.
(Image: © Sean Pavone/Shutterstock)

Meteorological winter is officially over, but it felt like it ended long before its Feb. 28 expiration date. Much of the U.S. basked in relentless warm weather throughout February, turning the clock forward to spring.

That follows December and January, which were both markedly warmer than normal for the majority of the country. While scientists crunch the numbers to figure out how warm the nation as a whole was this winter, early results show just how pervasive mild weather was.

Climate Central conducted an analysis of 1,500 weather stations across the U.S. and found that 84 percent had a winter that was warmer than normal, including 47 percent that had a winter among their 10 warmest on record. Not a single station east of the Mississippi was cooler than average. Of the stations in the analysis, 117 had a record warm winter. In comparison, only six stations had their coldest winter on record.

The heat spread from coast-to-coast with the Southeast being the hottest of the hot. Miami, Houston and Dallas all set seasonal heat records. Towns in Oklahoma approached 100°F. Chicago was snowless in January and February for the first time in 146 years of records. Massachusetts recorded its first February tornado.

Spring arrived up to 28 days early in the Southeast. The National Park Service is forecasting a mid-March cherry blossom peak on the National Mall, which would be the earliest on record.

The list keeps going, but you get the drift. February put the gears in motion for a spring like no other year.

"I can only say how things are shaping up so far, but so far, it's shockingly early," Theresa Crimmins, the assistant director of the National Phenology Network, told Climate Central last month.

February marked the 27th month in a row where daily record highs outpaced record lows in a record-setting fashion. Data through Feb. 26 — the last date for which data is available — show there were 6,045 record highs to only 112 record lows. That puts the ratio at 53-to-1, making it the most lopsided month on record. November 2016 previously held the record.

Record highs have become increasingly common in recent decades due to climate change and will become ever more common unless carbon pollution is cut.

While the Northeast is expected to have a cold snap this weekend, temperatures are poised to rebound by midweek. After that, the heat will roll on. The Climate Prediction Center forecasts that above normal temperatures are likely to continue for most of the U.S. through March and the rest of spring.

Climate change has been causing spring to arrive earlier and earlier, though this year is an extreme outlier. On average, spring is arriving three days earlier in the U.S. compared to the period of 1961-1980. The quickening pace of climate change means that spring could be up to 13 days earlier by mid-century and 21 days earlier by 2100 if carbon pollution isn't cut.

The march toward an earlier spring has major consequences for the natural world that has spent eons adapting to our current spring dates. In the West, it means snowpack is melting out sooner and reducing water resources during the dry summer season and extending wildfire season. Across the country, it can throw off bird and animal migration patterns.

Blasts of warm weather like the one the U.S. just experienced can also cause a phenomenon called false spring. This weekend's chill in the Northeast could put a damper on plant growth. Low temperatures will dip into the teens across much of the region. Burlington, Vt. could even experience sub-zero temperature for a bit on Friday or Saturday.

Fruit crops like peaches and cherries that took the warm weather as a cue to start budding could face challenges from the chill.

"Temperatures that rapidly drop can be problematic to plants once they've developed buds, as buds are vulnerable to hard freezes and temperatures below freezing," Crimmins said. "For plants with flower buds, this can lead to loss of the flowers and subsequent fruit, which is problematic for agricultural fruit production as well as wildlife depending on fruits of native plants."

That happened last year in the Northeast where peaches were wiped out due to a spring cold snap. Even though things will warm up again after this weekend, the combination of a warm winter and short cold snap could still be felt into summer.

You May Also Like: European Climate Action Faces Crucial Moment Warming Had Clear Hand in Record Australia Heat Scientists Are Poised to Start a New Movement Here's the Early Context for Trump's Budget