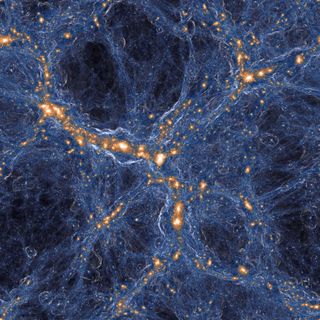 Blue gas swirls around orange galaxies in this simulation of galaxy formation. Within the blue lines lurk pockets of pristine hydrogen gas, unsullied by the heavy elements released by billions of years of exploding stars. Scientists working at the W.M. Keck Observatory in Hawaii may have just discovered one of these gassy "fossils" of the Big Bang.
(Image: © TNG Collaboration)

Scientists expect to encounter a lot of strange things in the dark trenches of the universe: Hurricanes of dark matter, screaming skull nebulas and cannibal galaxies slowly devouring each other are all par for the course in our bizarre cosmos.

One thing that stargazers typically don't expect to find, however, is undeveloped real estate.

Recently, for just the third time ever, astronomers working at the W.M. Keck Observatory on Hawaii's dormant Mauna Kea volcano think they've pinpointed a massive, interstellar gas cloud that seems to have remained untouched throughout billions of years of the universe's development. According to a forthcoming study in the journal Monthly Notices of the Royal Astronomical Society, the cloud — labeled LLS1723 — shows no visible traces of any elements heavier than hydrogen, the lightest known element and the first one believed to permeate the universe just moments after the Big Bang. [Big Bang to Civilization: 10 Amazing Origin Events]

"Everywhere we look, the gas in the universe is polluted by waste heavy elements from exploding stars," lead study author Fred Robert, a Ph.D. student at Swinburne University of Technology in Australia, said in a statement. "But this particular cloud seems pristine, unpolluted by stars even 1.5 billion years after the Big Bang."

The universe’s first stars were formed from hydrogen and helium alone; Every other element on the periodic table comes from fusion reactions inside stars, and scatters into space when those stars explode as supernovae. Why a single, gassy cloud should appear unburdened by heavier elements seen almost everywhere else in the universe remains a mystery. But for Robert and his colleagues, the "most compelling" explanation is that the cloud is a rare time capsule of the universe's earliest minutes, preserved from a time before ancient hydrogen and helium atoms forged the universe's first stars and, later, the rest of the elements in the periodic table we know today.

The team's discovery marks only the third cloud of cosmic gas believed to be totally unsullied by star stuff, (that is, every element heavier than helium).

The first two of these gassy mysteries were detected in 2011 by astronomer Michele Fumagalli and colleagues, also using the Keck Observatory's mountaintop telescope. According to that team's subsequent paper (published 2011 in the journal Science), the two clouds may have been the result of the strange and inconsistent ways that metal flows through interstellar space, and "could just be the tip of the iceberg" of a much larger population of unsullied space between the galaxies.

Robert and his colleagues were intrigued by the finds and soon embarked on a mission to systematically probe the universe for signs of more pristine hydrogen clouds. Using the Keck Observatory's optical telescope (said to be one of the most powerful in the world), the team targeted quasars — intensely bright objects that form when dust and gas particles are sucked into supermassive black holes at nearly light speed. The team picked 10 known quasars that had been previously shown to lurk behind low-metal dust clouds, like those that Fumagalli and his colleagues had identified in 2011.

Using these quasars as cosmic backlights to illuminate the gassy shadows in front of them, the researchers studied the precise wavelengths of light emitted through each target cloud. They found that only one cloud (our friend, LLS1723) showed no apparent traces of any elements besides hydrogen.

"Apparently metal-free clouds like LLS1723 may be completely pristine, intergalactic gas — surviving vestiges of the early universe that have never… [been] polluted by stellar debris," the authors concluded in their study.

The team's success provides further evidence that the cosmos might be full of pockets of metal-free space echoing the universe's earliest moments — and now, future researchers have a proven system for hunting and identifying them.

That search might well be worth it. According to Robert and his colleagues, understanding how clouds like LLS1723 may have been able to survive unsullied by heavy metals for so long is a question that will require further study of the cloud's nearby cosmic neighborhood. Finding and studying other pure-hydrogen parcels of space might also reveal new information about how the universe's very first stars formed from metal-free surroundings. Paradoxically, this is one story that scientists can only complete by finding a whole lot of nothing.