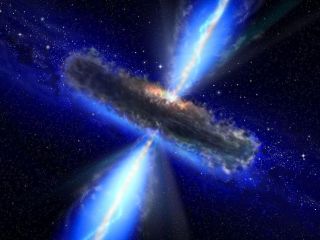 A newfound black hole is so mighty, it eats suns like ours for breakfast.

Well, sort of. According to a new paper published online May 11 in the preprint journal arXiv, astronomers have discovered the fastest-growing black hole known in the universe. The supermassive object is estimated to be more than 12 billion years old, have a mass greater than 20 billion suns and could be growing at a rate of about 1 percent every 1 million years.

And, like all growing boys, this supermassive black hole has a hefty appetite. The newly described object consumes roughly the mass of Earth's sun every two days, the researchers wrote — and all that guzzling is leaving a mark on the surrounding galaxy. [Stephen Hawking's Most Far-Out Ideas About Black Holes]

"This black hole is growing so rapidly that it's shining thousands of times more brightly than an entire galaxy, due to all of the gases it sucks in daily that cause lots of friction and heat," lead study author Christian Wolf, an astronomer at the Australian National University (ANU), said in a statement.

"If we had this monster sitting at the center of our Milky Way galaxy, it would appear 10 times brighter than a full moon," Wolf added. "It would appear as an incredibly bright pin-point star that would almost wash out all of the stars in the sky."

When the light around a supermassive black hole shines as bright as the stars, the resulting glare is called a quasar. These massive, black-hole-powered beacons sit in the middle of galaxies that are billions of years old, and billions of light-years away from Earth. In a sense, studying the ancient light emitted by these quasars is like studying the early "dark ages" of the universe, the researchers wrote.

To thoroughly describe this new quasar, Wolf and his colleagues combined visible and infrared light wave measurements from ANU's SkyMapper telescope with observations taken from several previous space surveys, including the massive new data release from the European Space Agency's Gaia satellite. (If you haven't seen Gaia's new map of the Milky Way, you really should.) Through these observations, the team determined that this newfound quasar is stationary, perhaps the most luminous one ever discovered, and somehow managed to grow very large (it started at roughly the size of 5,000 suns, Wolf told CNN) within about 1 billion years following the Big Bang.

Wolf said he doesn't know how this supermassive black hole could've gotten so big, so fast in the dark days of the universe. But now that scientists know about it, they can use the quasar as a giant backlight for studying nearby galaxies in much greater detail than would otherwise be possible.

This study has yet to appear in a peer-reviewed journal.