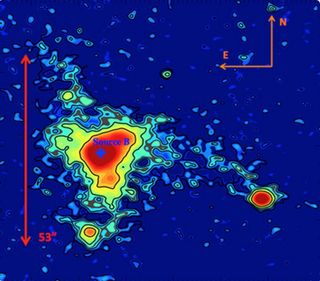 The discovery of a new and rarely seen nebula 10 billion light-years away has created a cosmic mystery: What is lighting up this dusty cloud of gases?

Researchers led by Zheng Cai, a postdoctoral fellow at the University of California, Santa Cruz, have discovered an "enormous Lyman-alpha nebula," or ELAN, only the third of these vast cosmic structures ever seen. A nebula is an interstellar cloud of gases and dust; an ELAN is a special kind of nebula, so named because it emits Lyman-alpha radiation — a particular wavelength of light emitted when the electron in a hydrogen atom drops down to its lowest energy level.

The two other ELANS previously discovered are nicknamed the Slug Nebula (for UC Santa Cruz's idiosyncratic mascot) and the Jackpot Nebula (because it contains a whopping four quasars, extremely bright objects created by particles accelerating away from black holes). But the new ELAN is a head-scratcher. The Slug and the Jackpot have bright quasars illuminating their dust and gases, but the light source inside the newfound ELAN is a mystery. [Photos: The 12 Strangest Places on Earth]

"What's really odd here, and one of the hooks of the story, is there's nothing," said Jason X Prochaska, a professor of astronomy and astrophysics at UC Santa Cruz and one of the authors of the paper reporting the new nebula, available on the physics preprint website ArXiv. "There's the faint smudge of a galaxy, probably, but no quasar shining toward us."

A peek at the early universe

The mysterious ELAN is named MAMMOTH-1, after the Mapping the Most Massive Overdensities Through Hydrogen (MAMMOTH) project, led by Cai, which turned up the strange nebula. The goal of the project is to search for dense areas in the early universe; because it takes light from MAMMOTH-1 about 10 billion years to reach Earth, scientists are looking back in time to about 3 billion years after the Big Bang. In particular, Prochaska said, the research team is searching for protoclusters, which are the precursors to galaxy clusters.

These are "the most massive single structures in the universe," Prochaska said.

Cai, Prochaska and their colleagues use light from quasars to find these protoclusters. When a quasar shines through a protocluster, the patterns of light absorption can reveal details about these networks of galaxies. The protocluster holding MAMMOTH-1 near its center — dubbed BOSS1441 — is around 50 million light-years across, the researchers found. Or was, anyway. By now, the protocluster will have collapsed into a smaller, more mature galaxy cluster, Prochaska said. (A light-year is about 5.9 trillion miles, or 9.5 trillion kilometers.)

Looking for the light

ELANs are difficult to detect because they are so diffuse, Prochaska said. Directly observing one provides an opportunity to study how gases coalesce into galaxies, something that is usually possible only with computer simulations. [See Amazing Photos of Nebulas]

As for MAMMOTH-1's mysterious light source, the most likely candidate is an active galactic nucleus, or AGN, Prochaska said. (Quasars are one type of AGN.) Local dust, a few light-years from the AGN, may be obscuring it from view, he said. It should be easy to find the AGN by searching for infrared or longer wavelengths, Prochaska said.

"If we didn't see anything, that would kill that hypothesis, and we'd be scratching our heads," he said.

The research will be published in an upcoming issue of the Astrophysical Journal.