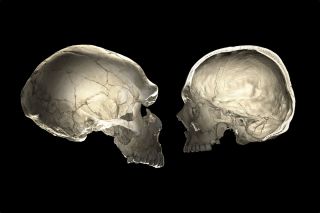 One of the features that distinguishes modern humans (right) from Neandertals (left) is a globular shape of the braincase.
(Image: © Philipp Gunz (CC BY-NC-ND 4.0))

The shape of your brain may say a lot about the Neanderthal in you. New research has found that modern humans carrying certain genetic fragments from our closest extinct relatives may have more oblong brains and skulls than other people.

Previous research had suggested these contrasting skull shapes might reflect differences in the size of various brain regions in modern humans and Neanderthals, and how these brain areas were wired together. "However, brain tissue doesn't fossilize, so the underlying biology has remained elusive," co-lead study author Philipp Gunz, a paleoanthropologist at the Max Planck Institute for Evolutionary Anthropology in Leipzig, Germany, told Live Science. [3D Images: Exploring the Human Brain]

To help solve this mystery, scientists first took CT (computed tomography) scans of seven fossil Neanderthal skulls and 19 modern human skulls. They developed imprints of the interiors of the skulls' braincases and measured their roundness.

Next, the researchers analyzed nearly 4,500 modern humans for whom they had both genetic data and magnetic resonance imaging (MRI) scans of their brains.

"We reasoned that if we could identify specific Neanderthal DNA fragments in a large enough sample of living humans, we would be able to test whether any of these fragments push towards a less globular brain shape, allowing us to zoom in on genes that might be important for this trait," senior study author Simon Fisher, a neurogeneticist at the Max Planck Institute for Psycholinguistics in Nijmegen, the Netherlands, told Live Science.

The Neanderthal DNA fragments contained two genes previous research linked to brain development. One, UBR4, is linked with the generation of neurons, and the other, PHLPP1, is associated with the development of fatty insulation around nerve cells.

The researchers discovered that this Neanderthal DNA had the strongest effects on brain structures known as the putamen and the cerebellum — both of which are key to the preparation, learning and coordination of movements. The putamen forms the outer portion of the brain's basal ganglia, which are associated with memory, attention, planning, the learning of skills, and potentially speech and language.

The scientists noted that if a person has more Neanderthal DNA than average, that does not necessarily mean their brain is more oblong. "Two people who have very similar total amounts of Neanderthal DNA — for example, 1 percent of their genomes — may well carry completely different fragments," Fisher said.

The researchers also noted these skull differences likely did not reflect any differences at the time of an infant's birth: Modern humans and Neanderthals have similar braincase and skull shapes at that time, Gunz said. After birth, differences in brain development likely resulted in the pronounced differences that are found in skull shape between adults of the two lineages, he added.

Future research can look for more Neanderthal DNA linked with modern human brains and determine what specific effects these ancient genetic variants might have by growing brain tissue with Neanderthal DNA in the lab, Fisher said.

The scientists detailed their findings online Dec. 13 in the journal Current Biology.