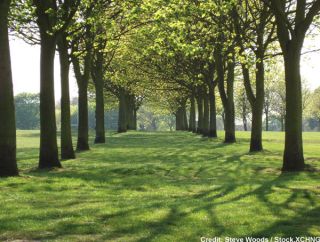 Photo taken by Steve Woods. (woodsy) There are no usage restrictions for this photo

Plants take carbon dioxide (CO2) out of the atmosphere to do photosynthesis, and thus help reduce the greenhouse gases warming the planet. At least, that’s how the story went before researchers from the Carnegie Institution for Science (CIS) realized that today’s carbon dioxide levels cause the plants to behave in a way that actually contributes to global warming.

Writing in the latest issue of the journal Proceedings of the National Academy of Sciences, the CIS scientists unveiled new research that shows increased carbon dioxide levels cause plants to retain water that otherwise would have evaporated from their leaves, entered the atmosphere and helped cool the planet. At local levels, this effect can increase the temperature so that it is 25 percent higher than what the greenhouse effect would have done on its own.

“There is no longer any doubt that carbon dioxide decreases evaporative cooling by plants and that this decreased cooling adds to global warming,” said Long Cao, a CIS scientist and study coauthor . “This effect would cause significant warming even if carbon dioxide were not a greenhouse gas.”

This increased warming results from plant leaves’ natural reaction to high CO2 environments. Plant leaves have tiny vents called stomata that open or close to let the plant breathe. In the presence of a high carbon dioxide concentration, the stomata don’t need to open as wide to breathe in the same amount of CO2, and so they close up to prevent excess water from escaping.

Most climate models don’t take into account the cooling effect of this water, so the CIS researchers generated new climate models based on their understanding of this phenomenon.

The new model showed that, averaged over the entire globe, the decreased water loss from plants accounts for 16 percent of warming of the land surface, with greenhouse effects accounting for the rest. But in some regions, such as parts of North America and eastern Asia, the effect can account for more than 25 percent of the total warming.

Unfortunately, these results don’t just confirm that the contribution of CO2 to global warming is worse than scientists previously thought, but also greatly complicate any attempts to reverse the warming process.

“We need to take great care in considering what kind of changes we make to forests and other ecosystems, because they are likely to have important climate consequences,” said study coauthor and CIS scientist Ken Caldeira.