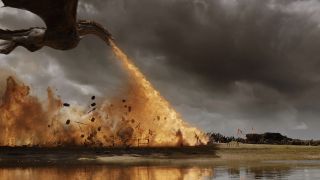 According to new research, nearly 74 percent of all deaths in "Game of Thrones" were caused by injuries.
(Image: © HBO)

If you want to survive the "Game of Thrones," it pays to be noble, female and flexible about the concept of loyalty.

In a new published study (yes, really), epidemiologists at Macquarie University in Australia analyzed the deaths of the key characters in the "Game of Thrones" HBO series and found that nobles died at a lower rate than commoners, and women died at a lower rate than men. Switching allegiances, like the character of Tyrion Lannister does by throwing in his lot with Daenerys Targaryen, is another winning survival strategy.

The researchers published their findings in the open-access journal Injury Epidemiology, probably because "Game of Thrones" is like candy for anyone who loves both injuries and epidemiology. In the paper, the authors described their goals as examining the mortality of "Game of Thrones'" characters — and giving "the authors an excuse to re-watch the first seven seasons before the final season reaches television screens worldwide."

The study didn't require funding, the authors noted, as they already owned all the DVDs.

A full 73.7 percent of all deaths in "Game of Thrones" were caused by injuries, the researchers found, with wounds to the head and neck (hello, decapitation) leading the pack. Another 11.8 percent of deaths came from burns, and 4.8 percent were from poisonings. Only two characters, Maester Aemon and Old Nan, have died of natural causes in the show. [Photos: 33 Stunning Locations Where 'Game of Thrones' Was Filmed]

"The risk of death is high among characters in 'Game of Thrones,'" injury epidemiologist Reidar Lystad, of the Australian Institute of Health Innovation, said in a statement. "By the end of the seventh season, more than half the characters had died — 186 out of the 33 characters we included in this study — with violent deaths being the most common by far."

The median survival time of characters was 28 hours and 48 minutes of show time, the researchers found, with a range of from a mere 11 seconds to 57 hours and 15 minutes. (There have been 67 episodes of the show so far.) The risk of dying within one's first hour on the show was 14 percent — newbies, beware.

The all-in-fun findings may not surprise regular viewers, Lystad said. But they might be of interest to diehard fans anyway.

"We have identified several factors that may be associated with better or worse survival," he said, "which may help us to speculate about who will prevail in the final season."