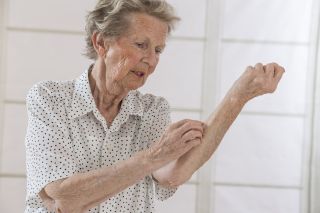 Shingles, also called herpes zoster, is a viral disease that can cause a painful, blistering rash, which usually appears on one side of the body. It's caused by the same virus that causes chickenpox.

About one in three Americans will develop shingles at some point in their lives, according to the Centers for Disease Control and Prevention (CDC). An estimated 1 million cases occur in the U.S. each year, mostly in older adults.

Although the rash usually clears up within a few weeks, some people may experience lingering pain for months or even years afterwards, according to the CDC. But there are vaccines to prevent shingles, as well as treatments that may reduce the risk of complications from the disease.

Shingles symptoms usually develop on one side of the body or face, and appear in a limited area, rather than all over, according to the National Institute on Aging (NIA). Symptoms include:

Other symptoms can include fever, headache, chills and upset stomach, according to the CDC.

Blisters from the shingles rash usually scab over after 7 to 10 days, and the rash clears up within 2 to 4 weeks, the CDC says.

Shingles is caused by the varicella zoster virus — the same virus that causes chickenpox, according to the CDC. After a person has chickenpox, the virus lies dormant in the body's nerve tissues and can "reactivate" years later to cause shingles.

Shingles itself cannot spread person-to-person. But it's possible for a person with shingles to spread the varicella zoster virus, which would cause chickenpox in someone who has never had chickenpox or received the chickenpox vaccine, according to the CDC.

Still, shingles is less contagious than chickenpox, and the risk of spreading the virus is low if the rash is covered, the CDC says.

Anyone who has had chickenpox is at risk of developing shingles. But some factors increase the risk of getting shingles, according to the NIA. These include:

Doctors usually diagnose shingles based on a patient's symptoms of pain on one side of the body along with the hallmark rash, according to the Mayo Clinic. Doctors may also take a small sample from the tissue or blisters for lab tests.

There's no cure for the shingles rash, but there are antiviral medications available that may reduce the duration and severity of the disease. These medications work best if taken within the first 3 days of rash symptoms, according to the National Institutes of Health (NIH). That's why it's important for people who think they have shingles to contact their doctor as soon as possible, the NIH says.

About 10 to 13 percent of people who get shingles develop a complication called postherpetic neuralgia, or PHN, according to the CDC. The condition causes severe, and sometimes prolonged, pain in the area where a person had shingles, due to damaged nerve fibers.

Pain from PHN typically goes away in a few weeks or months, but can sometimes last for many years. The condition may interfere with people's daily activities and cause depression, anxiety, sleeplessness and weight loss, according to the NIA. There are medicines, including steroids, analgesics, antidepressants, and anticonvulsants, that may help with PHN.

There are vaccines that can reduce the risk of developing shingles and complications from the disease.

A vaccine called Shingrix is recommended for healthy adults ages 50 and older in two doses, according to the CDC. The second dose is given 6 months after the first dose. Shingrix is more than 90 percent effective at preventing shingles and PHN if given in two doses.

An older shingles vaccine, called Zostavax, is less preferred, but may be used in certain cases, such as if a person is allergic to Shingrix, or Shingrix is not immediately available, the NIA says.