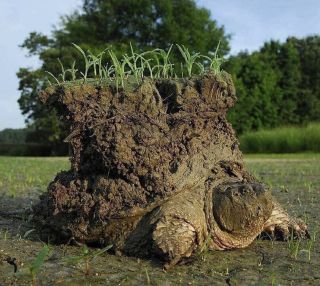 This snapping turtle is carrying the "earth" on its back.
(Image: © Timothy C. Roth)

The ancient cosmologers were right and Galileo was wrong: This turtle's got the whole freaking world on its back.

Live Science saw the above photo circulating on Twitter early last week and reached out to its originators — the good folks at Task Force Turtle — to get the full story behind it. That full story, it turns out, involves drugs, mysteries, amazing herpetological memories, butt gas and perhaps the ability to hold one's turtley breath for months on end.

The common snapping turtle in the image is one of a great number of snappers and painted turtles in the swamps of Maryland that Task Force Turtle — a project of herpetologists and undergraduate students at Washington College and other local institutions — has obsessively tracked over the course of the last decade-plus.

"All of our turtles, thousands of them now… have been fitted with radio transmitters in the summertime when they're making these movements [toward their winter mud holes]," Aaron R. Krochmal, a professor of biology at Washington College and one of the researchers who originated the project, said. "We follow them quite literally 24 hours a day."

The turtles in the area are interesting, he said, because they offer researchers the opportunity to study a migration in incredible detail. The turtles follow the same path, year after year, from their summer stomping grounds to their winter hideouts — tight packed, underground mud-holes where they can wait out the cold weather.

"What we think is super cool is that these animals do use a particular mud-place, if you will, a wallow. And they return each year to the same exact spot, and by exact spot I mean to the centimeter," Krochmal told Live Science.

That offers researchers an unusual opportunity to do a rigorous study of an annual migration, he said, getting up close and personal with the turtles in ways that just aren't possible with a herd of bison or Arctic terns on the move.

And the researchers do get quite up close and personal with their subjects, going so far as to mount "turtle-cams" on their backs to track their movements.

In the case of the turtle with the little living world on its back, Krochmal said, it hadn't actually just woken up from hibernation. Rather, she had just emerged from more than two weeks in the muddy earth by a lake that had dried up.

"We were actually not convinced that her radio transmitter was still attached," Krochmal said.

Most of the other turtles had moved on already toward their winter homes, and this one was deeply buried, showing no sign of emerging. Perhaps she'd gone already, managing to leave her transmitter behind.

But then the earth stirred, and, writhing, she emerged. Timothy Roth, a professor of psychology at Franklin and Marshall college snapped the picture.

The turtle, Krochmal said, weighs about 13 pounds (6 kilograms), and the 10-inch-thick (25 centimeters) world on her back weighed about 18 pounds (8 kg). But she began her journey toward her winter mud hole with no obvious sign of additional effort. [Top 10 Most Incredible Animal Journeys]

"She was just trucking right along," he said.

That tendency, to just follow the same path to the same mud hole year after year, is what draws Krochmal, Roth, and their colleagues to these creatures. It's just not known, he said, how common this sort of mud-hole migration is outside their area of Maryland. And it's a mystery exactly how the reptiles survive underground for months without coming up for air — though they may rely on pockets of air down there, and are known to slow their metabolic rates way down and gulp air bubbles through their mouths and cloacas (turtley anus-genital combination holes).

What the Turtle Task Force is slowly working out, however, is what it is in the critters' minds that lets them repeat such a specific journey every year, he said.

As part of that effort, he said, the team has dosed migrating turtles with a drug called scopolamine.

"What scopolamine does is it blocks the brain's ability to bind the neurotransmitter acetylcholine," he said.

That prevents the brain from forming or accessing memories. (In decades past, doctors administered it to women during childbirth, which is a whole other story.)

In migrating turtles, the researchers found, the drug causes them to lose their way.

"They just sort of wander in circles, as you might imagine, for about five or six hours until the drug wears off," Krochmal said. "Then they just sort of snap out of it, walk right back to their path, and continue along their path."

For the researchers, this is a story about how turtle brains process information to make their way back and forth across their little annual journey. For the turtles, it's a story of determination to continue going where you're going, no matter what chemicals some weird strangers inject into your body or what massive burdens you're carrying on your back.