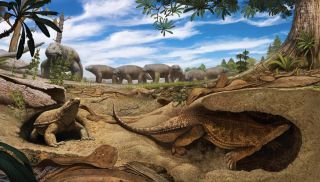 The proto-turtle Eunotosaurus burrows into the banks of a dried up pond to survive in the harsh, arid South African environment about 260 million years ago. In the background, a herd of Bradysaurus, a type of reptile, crowds around some muddy water.
(Image: © Andrey Atuchin)

The turtle's shell may serve as a protective shield nowadays, but ancient turtles actually developed shells for an entirely different reason, a new study finds.

Researchers looked at the remains of 47 ancient proto-turtles (Eunotosaurus africanus), ancient reptiles that sported partial shells. These animals had broadened ribs that likely helped them burrow underground, rather than serving as protective armor, the researchers said.

"Why the turtle shell evolved is a very Dr. Seuss-like question, and the answer seems pretty obvious — it was for protection," lead study author Tyler Lyson, a curator of vertebrate paleontology at the Denver Museum of Nature & Science, said in a statement. However, for the earliest turtles, "the turtle shell was not for protection, but rather for digging underground to escape the harsh South African environment where these early proto-turtles lived." [Image Gallery: 25 Amazing Ancient Beasts]

The evolutionary history of the turtle shell has long mystified scientists, largely because of "the scarcity of critical fossils," the researchers wrote in the study.

"We knew from both the fossil record and observing how the turtle shell develops in modern turtles that one of the first major changes toward a shell was the broadening of the ribs," Lyson said.

However, broadened ribs aren't exactly helpful for protection. In fact, they slow down their owner and make it difficult for the animal to move and breathe, the researchers said. For instance, ribs are used to support the body during movement and provide room for the lungs to expand. But broadened ribs stiffen the torso — which makes breathing challenging and the animal's strides shorter and slower.

Moreover, the ribs in most animals look the same, likely because they serve the same role across species.

"Ribs are generally pretty boring bones," Lyson said. "The ribs of whales, snakes, dinosaurs, humans and pretty much all other animals look the same. Turtles are the one exception, where they are highly modified to form the majority of the shell."

An analysis of the fossils in the new study, including a key 260-million-year-old fossil found by an 8-year-old boy in South Africa, helped researchers zero in on the turtle shell's beginnings.

The boy, Kobus Snyman, discovered the 6-inch-long (15 centimeters) proto-turtle fossil on his father's farm on the Western Cape of South Africa. The stunning specimen includes most of the skeleton, as well as the ancient reptile's hands and feet.

"I want to thank Kobus Snyman and shake his hand because, without Kobus, both finding the specimen and taking it to his local museum, the Fransie Pienaar Museum in Prince Albert, this study would not have been possible," said study co-author Bruce Rubidge, a professor at the Evolutionary Studies Institute at the University of Witwatersrand, in Johannesburg.

It's likely that the proto-turtle's ability to burrow underground helped it survive the Permian-Triassic extinction about 252 million years ago, the researchers said. They added that it took about 50 million years for the proto-turtles' broadened ribs to develop into a fully formed shell.

The study was published online Thursday (July 14) in the journal Current Biology.