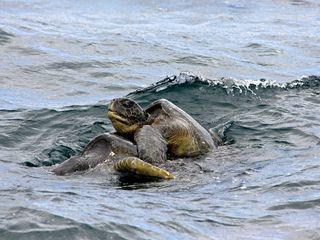 Modern sea turtles have been around for more than 100 million years. Given the ancient reptiles' longevity, one might expect the animals to have a highly successful breeding system. So just how do sea turtles do it?

Across all species, sea turtles are, for the most part, loners that only come together during the mating season. But this isn't necessarily true for all populations.

For example, Hawaiian green sea turtles— locally referred to as honu — are known to spend quite a bit of time together all year round. [In Photos: Tagging Baby Sea Turtles]

"Honu rest together, forage together and nest together," said George Balazs, a Hawaiian sea turtle expert with the National Oceanic and Atmospheric Administration. "Clearly, they are woven together into a kind of a community."

For each sea turtle population, the mating season typically occurs when the photoperiod (day length) and local temperature begin to increase. This is likely because incubation temperature drives the determination of each hatching's sex.

During this time, breeding females and males both return to the beaches where they hatched — females know it's a suitable nesting location, while males know they'll find females there, Hays said. Males generally arrive much earlier than females, because sea turtle mating runs on a first-come-first-serve basis.

As is the case with most other species, males will mate with any female they can. But female sea turtles aren't very choosy either, in that they don't seem to actively seek out the best, fittest males.

To mate, a male will climb onto a female's back while she is swimming horizontally in the water. On their front flippers, males have long claws, which they use to hook on to the leading edge of the female's shell — these claws are quite sharp and will often cut into the female's soft flesh near her shell.

Male and female sea turtles have cloaca — waste and reproductive orifices — at the base of their tails, and the male's cloaca houses his penis. During mating, the male will reach his tail underneath the back end of the female's shell. His long penis, which can be almost half the length of his shell, will emerge from his cloaca to penetrate and inseminate the female's cloaca.

"The male hangs on for dear life for up to 24 hours," said Dave Owens, a marine biologist at the College of Charleston in South Carolina. By remaining attached to the female, the male can prevent other males from mating with her. But his competition doesn't take this injustice lightly — they bite his tail and flippers (hard enough to draw blood and tear flesh) repeatedly to try to get him to let go.

After the pair separates, they go on to mate with other sea turtles. The female stops mating once she has enough sperm to fertilize all of her clutches for the season. "If a male approaches, she'll rip into him," Owens said.

Mating done, the female will climb on to the beach, lay her first clutch of eggs, bury them under sand and then return to the water; about two weeks later, she'll return to the beach to lay her second clutch. In a single season, the female may lay up to eight clutches before leaving the nesting grounds, Balazs said.

When the next breeding season rolls around, the male sea turtles return to the nesting site and begin the love game with new females; females from the previous season, on the other hand, don't come back for another few years, likely due to the energy required to produce those hundreds of eggs.