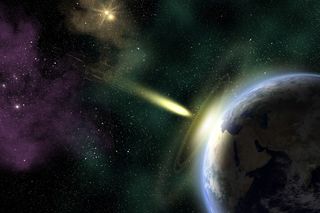 Some 3,700 years ago, a meteor or comet exploded over the Middle East, wiping out human life across a swath of land called Middle Ghor, north of the Dead Sea, say archaeologists who have found evidence of the cosmic airburst.

The airburst "in an instant, devastated approximately 500 km2 [about 200 square miles] immediately north of the Dead Sea, not only wiping out 100 percent of the [cities] and towns, but also stripping agricultural soils from once-fertile fields and covering the eastern Middle Ghor with a super-heated brine of Dead Sea anhydride salts pushed over the landscape by the event's frontal shock waves," the researchers wrote in the abstract for a paper that was presented at the American Schools of Oriental Research annual meeting held in Denver Nov. 14 to 17. Anhydride salts are a mix of salt and sulfates.

"Based upon the archaeological evidence, it took at least 600 years to recover sufficiently from the soil destruction and contamination before civilization could again become established in the eastern Middle Ghor," they wrote. Among the places destroyed was Tall el-Hammam, an ancient city that covered 89 acres (36 hectares) of land. [Wipe Out: History's Most Mysterious Extinctions]

Among the evidence that the scientists uncovered for the airburst are 3,700-year-old pieces of pottery from Tall el-Hammam that have an unusual appearance. The surface of the pottery had been vitrified (turned to glass). The temperature was also so high that pieces of zircon within the pottery turned into gas — something that requires a temperature of more than 7,230 degrees Fahrenheit (4,000 degrees Celsius), said Phillip Silvia, a field archaeologist and supervisor with the Tall el-Hammam Excavation Project. However, the heat, while powerful, did not last long enough to burn through entire pottery pieces, leaving parts of the pottery beneath the surface relatively unscathed.

The only naturally occurring event capable of causing such an unusual pattern of destruction, Silvia said, is a cosmic airburst — something that has occurred occasionally throughout Earth's history, such as the explosion in 1908 at Tunguska in Siberia.

Also, archaeological excavations and surveys at other towns within the impacted area suggest a sudden wipeout of life around 3,700 years ago, Silvia said. So far, no craters have been found nearby, and it's unclear whether the culprit was a meteor or comet that exploded above the ground.

The fact that only 200 square miles of land was destroyed indicates that the airburst occurred at a low altitude, possibly not more than 3,280 feet (1 km) above the ground said Silvia. In comparison, the Tunguska airburst heavily damaged 830 square miles, or 2,150 square kilometersof land.