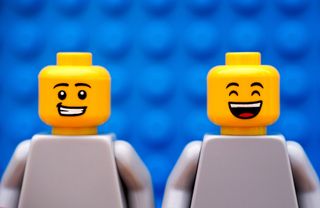 A group of scientists swallowed Lego figurine heads and then tracked how long it took for those pieces to make their way out.
(Image: © Shutterstock)

Earlier this year, six pediatric scientists decapitated six Lego minifigures, then swallowed the heads. The researchers did this to answer a simple, scientific question: How long does it take to poop a brick?

The answer, for those of you teetering on the edges of your seats, is about two to three days. The researchers know this because they picked apart every poo they made after swallowing the heads, until the unfortunate yellow faces were successfully retrieved. You can read all about it in the team's new study in the Nov. 22 issue of the Journal of Paediatrics and Child Health, playfully titled, "Everything Is Awesome: Don't Forget the Lego."

"This study was a bit of fun in the run-up to Xmas," Dr. Tessa Davis, a consultant in pediatric emergency medicine at Royal London Hospital and one of the bold study authors/Lego-swallowers, told Live Science in an email. "But actually, we get children presenting to the emergency department every day with ingested foreign objects." [11 Weird Things People Have Swallowed]

According to a 2006 report in the journal Current Opinion in Pediatrics, about 100,000 people in the U.S. ingest a nonedible object every year; about 80 percent of those cases occur in children ages 6 months to 3 years. Some swallowed objects, such as button batteries or someone else's medication, can pose significant health risks that require swift medical intervention. However, the most commonly swallowed objects — coins and tiny toy parts — often pass through the swallower's system without causing a disturbance.

Still, Davis said there's hardly any scientific literature looking at the precise effects of swallowed toys in children or adults. To fill that research gap in the simplest (and arguably funniest) way possible, Davis and five colleagues in Australia and the U.K. took it upon themselves to swallow — and then painstakingly retrieve — the world's most popular toy.

In a coordinated event, each researcher swallowed a single, smiling Lego head early one morning this year. For the three days before that, each participant had kept a detailed "stool diary" to monitor the hardness and frequency of their bowel movements. To do so, they used a custom rating system they called the Stool Hardness and Transit scale — aka, SHAT.

After swallowing their Lego heads, each researcher monitored and SHAT-rated their every bowel movement until each head was successfully retrieved on the other side (with one exception). The methods of retrieval were open to the participant's preferences. Plastic bags were a common tool of choice. Some of the doctors employed tongue depressors; others used chopsticks. Davis' retrieval involved "gloves, a cat fork and a vomit bowl. I'll leave the rest to your imagination," she said.

Luckily, it took Davis only two bowel movements to recapture her Lego head. This gave her a Find and Retrieval Time (aka, FART) score of 1.42 days. Two participants found their heads after a single bowel movement (which occurred between 27 and 32 hours after the initial swallowing), while two others found theirs after three stools. One unfortunate participant never found his Lego head. According to Davis, "he had to search every stool for two weeks." [5 Things Your Poo Says About Your Health]

What does this research tell us? For starters, it suggests that swallowing a Lego head isn't super dangerous, at least for a healthy adult. When the participants compared their SHAT scores from before the head-swallowing event to their own scores from afterward, they found that the consistency and frequency of their poos had not significantly changed. (The authors noted that the uniform roundness of Lego heads might help ease their passage through the body; repeating the study with sharp objects, like Lego legs or torsos, would carry a higher likelihood of internal damage or blockage.)

Secondly, we've learned that attempting to find objects in yours or someone else's stool is difficult and gross and probably shouldn't be done at home. "If an experienced clinician with a Ph.D. is unable to adequately find objects in their own stool, it seems clear that we should not be expecting parents to do so," Davis and her colleagues wrote in the study. "The authors feel that national guidance could include this advice."