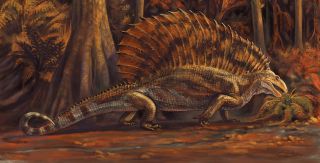 The newfound reptile Gordodon kraineri lived about 300 million years ago in what is now New Mexico. In this illustration, the beast is ready to gobble up the cone-like strobilus of an early cycad.
(Image: © Matt Celeskey/Lucas, S.G. et al. Palaeontologia Electronica. 2018./CC BY-NC-SA 4.0)

Although it may look like a dinosaur, a newly identified sail-backed reptile that lived 300 million years ago is actually more closely related to humans, a new study finds.

The bizarre 5-foot-long (1.5 meters) reptile is a sail-backed eupelycosaur (yoo-PEL-ee-ko-sore), a group of animals "that were very successful during the Permian," a period that lasted from about 300 million to 251 million years ago, just before the dawn of the dinosaurs, said study lead researcher Spencer Lucas, a curator of paleontology at the New Mexico Museum of Natural History and Science in Albuquerque.

"Eupelycosaurs include the ancestors of mammals, making this new skeleton more closely related to us than to dinosaurs," Lucas told Live Science in an email. [Photos: Unearthing Dinosauromorphs, the Ancestors of Dinosaurs]

A University of Oklahoma geology class discovered the newfound eupelycosaur fossils peeking out of a roadcut in New Mexico in March 2013. They told Lucas, who then collected the "exquisitely preserved but incomplete skeleton" with his colleagues in 2013 and 2014, he said.

After marveling at the reptile's well-preserved, 17-inch-tall (43 centimeters) back sail, the researchers couldn't stop ogling its robust teeth. While the beast has a number of small teeth inside its mouth, it sports larger chompers at the tip of its snout, inspiring the scientific name Gordodon kraineri. The genus name is taken from "gordo," the Spanish word for "fat," and "odon," the Greek word for "tooth." Gordo is also a reference to Alamogordo, the nearby city in southern New Mexico where the fossil was found. The species name honors Karl Krainer, a geologist at the University of Innsbruck in Austria, for his contributions to discoveries about the late Paleozoic geology and paleontology of New Mexico.

The approximately 75-lb. (34 kilograms) reptile had surprisingly advanced structures in its skull, jaws and teeth, indicating that it was a selective feeder that dined on high-nutrient plants, Lucas said.

"Other early herbivorous reptiles were not selective, chomping on any plants they came across," Lucas said. "But Gordodon had some of the same specializations found in modern animals, like goats and deer."

Until now, the oldest animals on record with teeth that were as specialized as G. kraineri were found in rocks no older than 205 million years ago, dating to the late Triassic period. "Gordodon extends this advanced type of plant eating by 95 million years," Lucas said.

In effect, the discovery of this "fat toothed" reptile rewrites paleontologists’ understanding of the early history of reptilian herbivory, he said.

The reason for G. kraineri's distinctive sail, however, is still a mystery.

"It has long been thought that the sails on the backs of reptiles like Gordodon were used in thermoregulation — the animal pumped blood into the sail, which increased the surface area over which the blood flowed, so that the blood could be more rapidly heated or cooled," Lucas said. "But, this is not certain."

The study was published online in the November issue of the journal Palaeontologia Electronica.