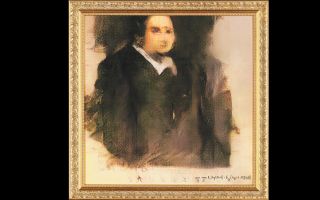 An unsettling portrait created by artificial intelligence (AI) is making a historic appearance on the auction block at Christie's in New York City this week. It will be the first artwork created by an algorithm to be offered for auction in the world of fine art.

The portrait — designed in the "Old Master" style reminiscent of European fine artists from centuries ago — only partially fills the canvas, leaving empty space around the central figure. It appears to represent a man with a blurred face, dressed in clothing similar to that worn by subjects painted by the Dutch artist Rembrandt van Rijn in the 17th century.

Of course, a computer didn't spontaneously pick up a brush and become an artist. The AI that generated the image had human programmers — a Parisian art collective called Obvious, Christie's reported. Their collaboration, titled "Portrait of Edmond De Belamy," is part of a series of paintings of the fictional Belamy family and is expected to fetch $7,000 to $10,000, according to Christie's. [Can Machines Be Creative? Meet 9 AI 'Artists']

To generate the portrait, the Obvious team first fed the neural network a diet of 15,000 images painted between the 14th and 20th centuries, to train it to recognize visual elements in fine art, Obvious artist Hugo Caselles-Dupré told Christie's. The algorithm that eventually created an original image had two parts that worked against each other, called the Generator and the Discriminator; they dubbed this combative AI "generative adversarial network" (GAN), Caselles-Dupré explained.

"The Generator makes a new image based on the set, then the Discriminator tries to spot the difference between a human-made image and one created by the Generator. The aim is to fool the Discriminator into thinking that the new images are real-life portraits. Then, we have a result," he told Christie's.

GAN's final image was then inkjet-printed on canvas and framed, according to Obvious. At the bottom of the portrait is a mathematical formula representing the algorithm that created it, a nod to the relationship between the Generator and the Discriminator, Obvious artists wrote on the collective's website.

Considering that this is the first fine-art auction to feature an AI-generated portrait, the "artist" is in very good company — also offered for sale in the auction is work by such renowned figures as Andy Warhol, Keith Haring, Louise Nevelson, Marc Chagall and Pablo Picasso, according to the Christie's auction catalog.

"Portrait of Edmond De Belamy" is part of the Christie's sale Prints and Multiples, which will be accepting bids from Oct. 23 to 25.