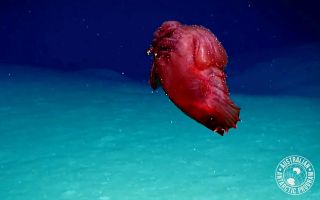 A swimming pink sea cucumber gets its unusual nickname from its resemblance to a plucked, decapitated chicken.
(Image: © Australian Antarctic Program)

Meet the real-life "chicken of the sea": a strange, pinkish-red creature with a body like a plump-breasted and decapitated chicken, earning the creature the name "headless chicken monster."

In truth, it is neither a chicken nor a monster. It's the swimming sea cucumber Enypniastes eximia, and scientists recently captured video of this bizarre, hen-mimicking swimmer in the Southern Ocean near eastern Antarctica, where it has never been seen before.

Footage shows the colorful sea cucumber drifting through the water; fins at the top and bottom of its tubby, translucent body almost resemble the stubby wings and legs on plucked, pink poultry ready for the pot. If you squint, you might think you're looking at the result of an ill-fated tryst between a chicken and Aquaman. [In Photos: Spooky Deep-Sea Creatures]

Not everyone recognizes the gelatinous sea cucumber's similarity to a chicken, though its appearance is undeniably peculiar. Photos of the crimson creature that were shared around the Live Science newsroom prompted comparisons to "a frilly pillow case," "a bloody flying squirrel," "a raw steak with fins" and "what you'd get if you asked a machine learning algorithm to make you a picture of a fish." [Editor's note: All of these are wrong; it looks like a floating chicken head.]

The so-called headless chicken monster, previously found only in the Gulf of Mexico, was recently detected by scientists with the Australian Antarctic Division (AAD), part of the Australian Department of the Environment dedicated to investigating Antarctica and the Southern Ocean. The researchers used new camera technology to detect the swimming sea cucumber at a depth of about 9,800 feet (3 kilometers) below sea level, AAD representatives said in a statement.

On average, E. eximia measures between 2 and 8 inches (6 to 20 centimeters) in length; adults' colors can range from dark reddish brown to crimson, though juveniles are typically a paler shade of pink, according to a study published in 1990 in the journal Smithsonian Contributions to the Marine Sciences.

While most types of sea cucumbers spend the majority of their time on the sea bed, swimming sea cucumbers like E. eximia land only to feed, researchers reported in the 1990 study.

Cameras designed for the AAD expedition were deployed on fishing lines, according to a YouTube video the agency shared yesterday (Oct. 21). The equipment is durable enough to be tossed over the side of a boat and can operate reliably for extended periods of time in the total darkness and crushing pressures of the deep ocean, AAD program director Dirk Welsford said in the statement.

"Some of the footage we are getting back from the cameras is breathtaking, including species we have never seen in this part of the world," Welsford said.

In addition to offering glimpses of unusual marine life such asE. eximia, the new camera system reveals the complex interplay of life in Southern Ocean depths, Welsford said. It will help scientists to advise policy makers about conserving vulnerable ecosystems that are threatened by commercial fishing, Welsford explained.