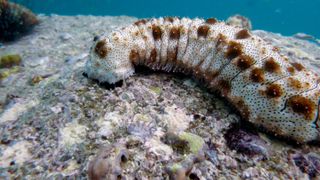 Sea cucumbers are blob-like marine invertebrates that are highly sought after by fishermen because of their high value in Asian seafood markets.
(Image: © Shutterstock)

Prosecutors in San Diego have charged two men who smuggled $17 million worth of sea cucumbers from Mexico to Asia with two years' probation and fines totaling over $1 million, The San Diego Union-Tribune reported.

The two men, David Mayorquin and his father, Ramon Torres Mayorquin, were named in a 26-count federal indictment filed last year for the illegal trafficking of wildlife from 2010 to 2012, the Tribune reported.

The father-and-son team reportedly own and operate the seafood company Blessings, Inc. based out of Tucson, Arizona. According to the company's single-page website, Blessings Seafood is a multinational distributor of Gulf Coast shrimp. [In Photos: Spooky Deep-Sea Creatures]

What's not mentioned on the website is that the men who run the company bribed Mexican officials, used fake bank accounts and falsified federal documents to illegally remove over 110 tons of sea cucumbers from Mexican waters, according to the indictment, the Tribune reported.

Sea cucumbers aren't related to the green gourd they're named after, but rather, they are marine invertebrates that look kind of like giant, fat garden slugs and come in a wide variety of colors and patterns. They're related to sea stars and sea urchins and belong to the taxonomic class called Holothuroidea.

There are more than 1,000 different species of sea cucumbers, and they live almost everywhere in the ocean, but in many areas they've been overfished, and as a result, the entire ecology of the area has suffered. Baja California, on the west coast of Mexico, is one of these regions. In 1994, the National Institute of Ecology in Mexico declared that the sea cucumbers of Baja were in danger of extinction, according to the University of Michigan's Museum of Zoology, and that status hasn't changed.

Despite their dwindling population, fishermen continue to target these defenseless, soft creatures because sea cucumbers fetch a pretty penny on the Asian seafood market, where they're considered a delicacy.

In 2011, sea cucumbers were selling for between $70 and $1,475 per pound on the Chinese market (the average sea cucumber weighs between 0.1 and 5 lbs., or 0.4 to 2.5 kilograms), according to a 2014 study published in the journal Proceedings of the Royal Society B, Biological Sciences.