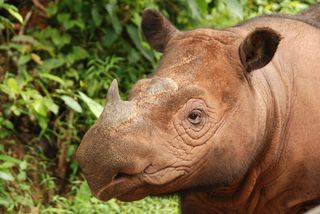 A conservation group, the World Wildlife Fund, has put together a report card ranking 23 nations' compliance with an international treaty regulating the trade in wild animals.

The report card focuses on three species sought after on the international black market: elephants, tigers and rhinoceroses, and evaluates how well certain countries have held up their commitments as part of the treaty.

"These are just three species, and they are probably the three most talked about, so they are a kind of bellwether for wider problems," said Colman O Criodain, wildlife trade specialist with the WWF.

The report looks at countries where these animals originate and must travel through, as well as the countries where they arrive for sale. There were some bright spots: India and Nepal received green marks for all three species, showing they had made progress toward complying with the treaty and enforcing policies to prevent the illegal trade.

Many countries, however, received red marks indicating they are failing to uphold their commitments under the treaty.

There have already been consequences for animals. In the last decade, the western black rhino went extinct and the Indochinese Javan rhinoceros was eradicated from Vietnam. Poaching played a crucial role, according to the International Union for Conservation of Nature.

Other subspecies of these large, plant-eating creatures are driven by demand for their horns. In Vietnam, demand for rhino horn has boomed thanks to rumors it has healing and aphrodisiac properties, O Criodain said. [Up and Away! Photos of Rhinos in Flight]

The report calls out Vietnam, which WWF says is the top destination for South African rhino horn, saying Vietnam's penalties for participating in the illegal trade are weak and legal measures are insufficient to curtail illegal trade on the Internet. "Despite numerous seizures elsewhere implicating (Viet Nam), there has been no recorded seizure of rhino horn in the country since 2008," reads a statement issued by WWF.

The Convention on International Trade in Endangered Species of Wild Fauna and Flora, a treaty signed by 175 nations, makes nearly all commercial trade in rhino horns, elephant ivory, tiger parts and other species threatened with extinction illegal. In addition, signatories committed to regulating trade within their borders.

WWF ranked nations' compliance with the treaty — evaluating whether or not the nation had adopted policies that supported the treaty — and the nations' enforcement of those policies.

A nation could have good laws on the books but fail to enforce them. For instance, China has laws tightly controlling the sale of elephant ivory. However, it does not have a strong record of enforcing them, O Criodain said.

The report card is not comprehensive; rather it is a snapshot that focuses on certain countries that face the highest levels of illegal trade in these three species. Countries from which a particular species has been eradicated, such as Central Africa which has lost all of its rhinos, escaped an evaluation, O Criodain noted.

The evaluation is based on government announcements reported in media, CITES documentation and information collected by Traffic, a wildlife trade monitoring network that is a joint program of the WWF and IUCN.