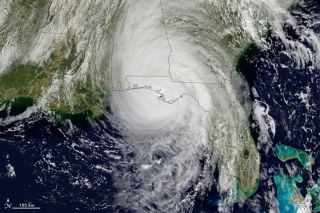 Hurricane Michael made an "unprecedented" landfall on the northern Gulf coast of Florida Wednesday afternoon (Oct. 10). Just as it came ashore, meteorologists with the National Hurricane Center (NHC) released data showing that the rapidly strengthening storm made landfall as the third-strongest hurricane in continental U.S. history. It edged out Hurricane Katrina, which devastated the Gulf coast in 2005.

When meteorologists talk about the power of hurricanes, they talk about barometric pressure, not wind speed. A hurricane is an intense low-pressure system, and, as National Geographic reported in 2015, the extent of atmospheric-pressure drop in the storm is the best meteorological proxy for the storm's overall strength and intensity.

Katrina made landfall in 2005 with a pressure reading of 920 millibars (about 8 percent lower than the average 1,000 mb air pressure at sea level), according to the NHC. The final recording from inside Michael before landfall was one tick lower: 919 mb. Two hurricanes in history have made landfall in the continental U.S. with lower pressures: Camille, which carved up the Mississippi coast at 900 mb in 1969, and the Labor Day storm that struck southern Florida at a peak intensity of 892 mb in 1935.

Hurricane Michael's slightly lower pressure than Katrina does not necessarily mean that it will be as dangerous or more so than the storm that flooded New Orleans. Katrina killed more than 1,000 people due to infrastructure failures and mismanagement of emergency resources, not because of where it sat on the record charts, according to various news outlets. But more powerful hurricanes can be apt to trigger those sort of failures. Hurricane Maria killed nearly 3,000 Americans in Puerto Rico in 2017 due to infrastructure failures after a landfall pressure of 914 mb. (Maria's Puerto Rican landfall doesn't count toward the continental U.S. pressure record because Puerto Rico, an island and U.S. territory, is not part of the physical, continental U.S.)

And there are reasons to worry about Michael being particularly dangerous. The storm struck an area of Florida not accustomed to powerful hurricanes, where many people live in mobile homes. Plus, the storm strengthened unexpectedly overnight before landfall, leaving little time for people to get the news of its intensity and evacuate.

Ultra-low-pressure storms have seemed fairly common in the 21st century. Rita and Wilma both produced barometric readings while still over the ocean in 2005 that rank in the top five lowest ever recorded. And in 2015, Hurricane Patricia struck Mexico after setting the world record: 879 mb. The Intergovernmental Panel on Climate Change (IPCC) released its landmark fifth report Monday (Oct. 8). It found that, according to the best available science, "the total number of tropical cyclones is projected to decrease under global warming, whilst the most intense (category 4 and 5) cyclones are projected to occur more frequently."

In other words, this could be the new normal.