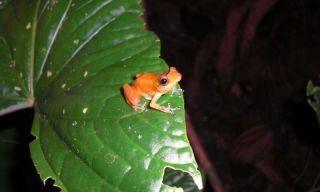 This nocturnal frog from the genus Diasporus is one the hardy remnant that lives on in fungus-devastated El Copé.
(Image: © Graziella DiRenzo)

Two decades ago, scientists discovered a sort of archaic fungus infecting frogs in Central America. Called Batrachochytrium dendrobatidis, or chytrid, the fungus appeared to be a rare and devastating threat: It altered the skin chemistry of infected hosts, robbing them of their ability to drink water and absorb electrolytes through their skin, eventually stopping their hearts. It was indiscriminate, able to jump easily between frog species and kill nearly all its hosts.

In a 2007 white paper, the International Union for Conservation of Nature (IUCN) wrote that as a result of the fungus (and the human activity that allowed it to spread all over the world), "the global amphibian extinction crisis and its present dynamics are the worst we have ever faced," adding, "It is the worst infectious disease ever recorded among vertebrates in terms of the number of species impacted and its propensity to drive them to extinction."

Now, a new paper offers some good news: There's evidence from one tropical site that frog ecosystems can adapt to the fungus, with certain infected species dying off and those that remain surviving their infections — likely because they've evolved to become resistant to its effects, and because the fungus itself has become less deadly. [7 Iconic Animals Humans Are Driving to Extinction]

In a paper published yesterday (Oct. 3) in the journal Ecological Applications, researchers describe how they studied tropical frogs in a region about 0.8 square miles (2 square kilometers) in Panama called El Copé. Between 2010 and 2014, researchers slowly wandered the area, picking up frogs and swabbing them for signs of the fungus. They divided the regions into squares of 66 feet by 66 feet (20 by 20 meters), keeping careful records of frogs of each species in each square and whether they turned up infected or not-infected.

While about half the frog species in the area went extinct when the epidemic first reached El Copé in 2004, by the 2010-to-2014 period the remaining populations appeared to have stabilized, researchers found. Infected frogs appeared to survive longer, fewer frogs overall were infected, and researchers didn't find the sorts of drastic population declines that occurred during the initial outbreak.

"Our results are really promising because they lead us to conclude that the El Copé frog community is stabilizing and not drifting to extinction," Graziella DiRenzo, a biologist at the University of California, Santa Barbara, and the lead author of the paper, said in a statement. "That's a big concern with chytrid worldwide. Before this study, we didn't know a lot about the communities that remain after an outbreak. In some areas, it's still a black box."

The overall outlook for frogs isn't good, the researchers were careful to note, describing the daily reality for the region's frogs as "grim" in the paper. But they showed that things could be a lot worse.

"Our study found that, even though there are a lot of infected individuals, about 98 percent of them are infected at very low levels," Karen Lips, a biologist at the University of Maryland and a co-author on the paper, said in the statement. "We know that, early on, several species played a key role in spreading infection, like Typhoid Mary. But some of these species are now gone, so the entire ecosystem is totally different. It's almost not comparable to what was there before."

It's unclear what the long-term prospects for frogs are at this point, whether in Panama or elsewhere. However, Lips said, "If enough frog species in a given place can survive and persist, then hopefully someday a vibrant new frog community will replace what was lost."