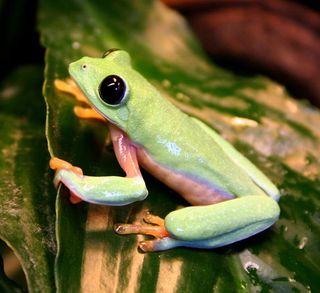 This frog is the offspring of two closely related species of endangered leaf frog.
(Image: © © A. Gray)

A newly bred hybrid frog – the offspring of two species of tropical leaf frogs – is one of a kind and even rarer than its endangered parents.

A scientist at The Manchester Museum in England allowed the two species of endangered Central American leaf frogs housed within the same chamber to interbreed to better understand how closely these parents are related. Understanding the genetic relationships between, and even within, species is important when trying to protect them.

This was a match made in lab heaven. The parents, Agalychnis annae and Agalychnis moreletii, wouldn't cross paths on their own, since they occupy different regions in Central America. In the past 30 years, populations of endangered leaf frogs have completely disappeared, particularly at cooler, high elevations. The amphibian-devastating chytrid fungus is implicated.

Frogs that have adapted to less fungus-friendly habitats are likely to be less at risk, making it important to identify the differences between populations, writes Andrew Gray, the museum's curator of herpetology, in a study that appeared in February in arXiv, an open archive maintained by Cornell University.

"There is also real concern that certain populations may disappear before their distinctiveness has even been established," Gray writes.

The parents look very much alike – in fact their skulls are nearly indistinguishable – but they have different coloration. Their love child resembles both, but is also distinct. It has dark red irises like the papa frog A. moreletii, and the purple-to-blue coloration along its flanks and thighs, like most A. annae, the mama frog. However, its hands and feet are more intense orange than seen in either parent.

Hybridization experiments like this are helpful in better understanding the inheritance of genes in amphibians, including those determining color patterns, the researchers write.