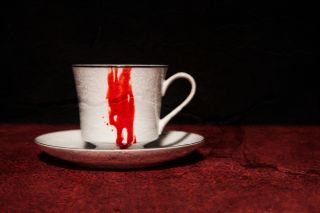 In a new study, 16 volunteers went above and beyond in the name of a better diagnosis for inflammatory bowel disease: They drank their own blood.

The "vampire" study reveals the limitations of a common method for diagnosing disorders like Crohn's disease. That method involves looking for a protein linked to intestinal inflammation in a person's stool. But while the protein, called calprotectin, does show up in cases of intestinal inflammation, it can also be a sign of simple gastrointestinal (GI) bleeding, and that distinction can be difficult to make, the researchers reported in the August issue of the United European Gastroenterology Journal.

The protein is still an excellent disease marker, said lead study author Dr. Stephan Vavricka, a gastroenterologist and leader at the Centre for Gastroenterology and Hepatology in Zurich, meaning that calprotectin's presence can indeed signal disease. [Get Gutsy About Your Digestive Health]

However, doctors should be aware that high levels of calprotectin may, in special situations, be a sign of bleeding and not a sign of inflammation, Vavricka told Live Science.

The trouble with inflammation

Inflammatory bowel disease (IBD) — which includes conditions such as Crohn's disease and ulcerative colitis — is challenging to diagnose and treat, in part because the inflammation in the gut doesn't always track with a patient's symptoms. For example, a person can continue to have symptoms such as diarrhea after the inflammation in the gut mostly dies down, Vavricka and his colleagues wrote in their new paper, and symptom severity is naturally subjective.

Likewise, inflammation doesn't always track with symptoms. A patient can show heightened immune activity because of other conditions, like arthritis or a simple viral infection. That's why an endoscopy — an examination that involves inserting a long tube with a camera into a person's gut — is the best way to gauge someone's inflammatory bowel disease activity.

But endoscopy is an invasive and uncomfortable procedure, so doctors often turn to stool samples to assess a patient's disease. One of the main proteins doctors check for is calprotectin, which is present in immune cells called neutrophils. During bouts of inflammation, neutrophils flood the mucosal lining of the intestine.

The problem, Vavricka said, is that neutrophils are also present in the blood. So, if a patient has bleeding in their upper GI tract — a common symptom in IBD — neutrophils and thus calprotectin can show up in stool samples. This confuses the issue of whether the person is undergoing an inflammatory flare. (The upper GI tract refers to the esophagus, stomach and the upper part of the small intestine, according to the Mayo Clinic.)

"Before we did the study, we were not sure how much blood has to arrive into the intestine before you have a positive calprotectin level," Vavricka said.

To find out, Vavricka and his colleagues asked 16 healthy volunteers, mostly medical students at Triemli Hospital in Zurich, to drink their own blood in either 3-ounce (100 milliliters) or 10-ounce (300 ml) doses. One month later, those who took the 3-ounce dose returned to gulp a 10-ounce dose, and vice versa. (For reference, U.S. airline travelers are allowed to carry 3.4 ounces of liquid in a single container onto a plane.) [7 Strange Ways Humans Act Like Vampires]

Most of the 12 women and four men who took part in the study simply drank the blood, though a few opted for a nasogastric tube to deliver the blood directly to their stomachs. About half of the participants complained of stomach-roiling symptoms such as nausea, and a third to a quarter said they had diarrhea or constipation after ingestion.

All participants noted that their poop was unusually dark after they drank blood, a well-known side effect of having blood in the digestive system. The participants gave stool samples two days before drinking blood, every day for seven days after that and once more at 14 days after drinking the blood.

The researchers did not see levels as high as 200 micrograms per gram, an amount that can be present in an inflammatory bowel disease flare. This means that doctors need to consider calprotectin levels in context, Vavricka said. Extremely high levels likely indicate an IBD diagnosis.

At lower levels, other factors should be considered before making an IBD diagnosis. A patient with risk factors for upper GI bleeding, such as having high blood pressure or taking a lot of NSAID pain relievers such as aspirin, for example, is likely to be showing elevated levels because of bleeding, Vavricka said. On the other hand, a patient with lots of abdominal pain or a family history of IBD might indeed be having an inflammatory flare if calprotectin levels rise.