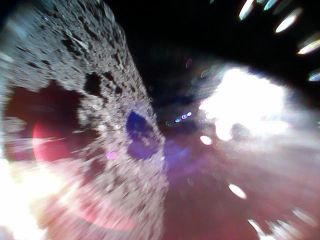 The suspense is over: Two tiny hopping robots have successfully landed on an asteroid called Ryugu — and they've even sent back some wild postcards from their new home.

The tiny rovers are part of the Japan Aerospace Exploration Agency's Hayabusa2 asteroid sample-return mission. Engineers with the agency deployed the robots early Friday (Sept. 21), but JAXA waited until today (Sept. 22) to confirm the operation was successful and both rovers made the landing safely.

The rovers are part of the MINERVA-II1 program, and are designed to hop along the asteroid's surface, taking photographs and gathering data. In fact, one of the initial images sent home by the hoppers is awfully blurry, since the robot snapped it while still on the go.

In order to complete the deployment, the main spacecraft of the Hayabusa2 mission lowered itself carefully down toward the surface until it was just 120 feet (55 meters) up. After the rovers were on their way, the spacecraft raised itself back up to its typical altitude of about 12.5 miles above the asteroid's surface (20 kilometers).

The agency still has two more deployments yet to accomplish before it can rest easy: Hayabusa2 is scheduled to deploy a larger rover called MASCOT in October and another tiny hopper next year. And of course, the main spacecraft has a host of other tasks to accomplish during its stay at Ryugu — most notably, to collect a sample of the primitive world to bring home to Earth for laboratory analysis.