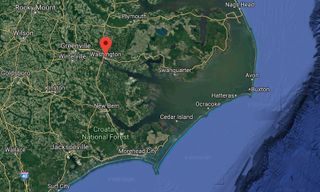 The town of Washington, North Carolina is about 30 miles up the Pamlico River from the coast.
(Image: © Google Maps)

In a hurricane, as Live Science has reported, the most significant threat is flooding, not the high winds.

And Hurricane Florence, though far from the fastest-windspeed storm in recent memory, remains a significant threat precisely due to the large surge and huge rainfall it's dumping on affected areas. Already, video has come out from along the Carolina coastline showing that the ocean has effectively moved onto the land, swamping homes in the affected area. And it's travelling farther and creating deeper floods thanks to sea-level rise from climate change, which research indicates has added as much as 6 inches to Florence's surge.

But it's not only North Carolinians who live along the coast who are being impacted by severe flooding.

Images and video posted on Twitter from the town of Washington, North Carolina, show that floodwaters have travelled as much as 30 miles (nearly 50 kilometers) inland along the Pamlico River, drowning the riverfront.

(Storm surges can travel up rivers and across low-lying areas, and do not only affect beachfronts.)

Hurricane Florence remains a significant storm surge and flash flood event, according to the latest public advisory from the National Hurricane Center. Storm surges as high as 7 to 11 feet remain threats from Cape Fear to Cape Lookout in North Carolina, with life-threatening surges up to 6 feet possible across a much wider area. The storm continues to very slowly move west and inland, and will continue to impact the region through the weekend.