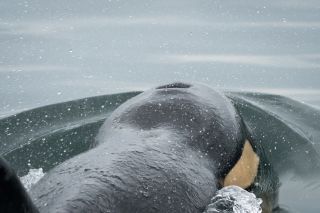 J50 photographed on Sept. 7 near San Juan Island, Washington. The juvenile orca is ailing, and NOAA is considering a plan to capture her, if she's still alive.
(Image: © Katy Foster/NOAA Fisheries Permit No. 18786-03)

National Oceanic and Atmospheric Administration (NOAA) officials are considering taking desperate measures to rescue a debilitated endangered killer whale (Orcinus orca), but it might be too late.

J50, or Scarlet, is an ailing young orca who hasn't been seen off the coast of Washington since Sept. 7. Last night (Sept. 13), the Center for Whale Research, a nonprofit conservation and research group based in Washington, declared Scarlet to be dead. However, Scarlet has gone missing for more than a week in the past, only to reappear. So search teams from NOAA and the U.S. Coast Guard are operating under the assumption that she is still alive and are thus continuing their search from the air and the sea.

If Scarlet is found, NOAA plans tocapture her for rehabilitation in captivity until she is healthy enough to return to the wild.

"NOAA Fisheries' focused objective is that J50 survives in the wild and ultimately contributes to the recovery of southern killer whales," Chris Yates, NOAA's assistant regional manager for protected resources on the West Coast, said during a news conference Wednesday (Sept. 12).

The agency had success with the rescue and rehabilitation of a young orca once before, in 2002, but it was a challenging endeavor. If Scarlet is still alive, her health is deteriorating rapidly, and it's unclear if capture would prove too stressful for this delicate orca.

Scarlet is a 3-year-old female (born in December 2014) who is part of the J pod, one of three small groups of orcas (also called killer whales) within the endangered southern resident killer whale subpopulation. The J pod also includes J35, or Tahlequah, a female whose calf died a half-hour after it was born on July 24. Biologists watched the grieving mother carry her dead calf around for hundreds of miles for more than two weeks. [In Photos: Response Teams Try to Save Starving Killer Whale]

Scarlet is one of the few reproductive-age females in this group, and her death would be a blow for this struggling group of killer whales. The southern resident killer whale subpopulation has declined from 98 individuals in 1995 to just 75 now, according to NOAA.

Since early August, teams of biologists and veterinarians in Washington and Canada have been working together to closely monitor Scarlet's health. When weather conditions allowed, the teams collected breath and fecal samples from Scarlet and administered antibiotics through a dart.

But Scarlet continued to struggle. Her "peanut head" became more pronounced as the layers of fat disappeared from the base of her head. She had trouble keeping up with her family and occasionally went missing for days at a time, making biologists fear the worst.

When Scarlet was spotted again on Aug. 12, fishers with the Lummi Nation, a Native American tribe in western Washington, attempted to feed Scarlet fresh salmon by delivering the live fish through a tube placed in the water and pointed in her general direction. They're not sure if Scarlet chowed down on the easy prey, but even if she did, her health continued to decline.

A fecal sample revealed that Scarlet may have had a common parasite that doesn't cause problems in otherwise-healthy marine mammals but can be devastating for emaciated animals like her, NOAA reported. But before veterinarians could administer a dewormer or another dose of antibiotics, Scarlet disappeared.

Nearly two weeks passed before Scarlet was spotted again, and on Sept. 6, veterinarians were able to administer medication for a second time. But after seeing how thin Scarlet had become, experts said she would need more attentive rehabilitation to recover from whatever illness she has — and that would mean bringing her into captivity.

"It was striking to me how thin she was," Dr. Joe Gaydos, a veterinarian with the University of California, Davis Wildlife Health Center, said during a news conference Wednesday (Sept. 12). "She was thin when I saw her two weeks before, and I was surprised at how thin she had really become — the thinnest killer whale that I've ever seen."

In 2002, NOAA captured Springer, an orphaned young orca who was struggling to survive. Springer had to be taught to avoid humans and boats once she was released but has since gone on to have two healthy calves, according to NOAA.

NOAA officials recognize how invested the public has become in the plan to save Scarlet, and on Tuesday (Sept. 11), the agency announced two public meetings scheduled for this Saturday and Sunday (Sept. 15 and Sept. 16) in Washington state to hear the public's views. Now that at least one group has declared Scarlet dead, it's unclear if those meetings will happen as planned.

Following the Center for Whale Research's declaration last night, NOAA posted a message on its Facebook page: "We have not given up."

Although it's possible that Scarlet is gone forever, NOAA teams are "aggressively searching again today [Sept. 14]," Jim Milbury, a spokesman for the agency told Live Science.