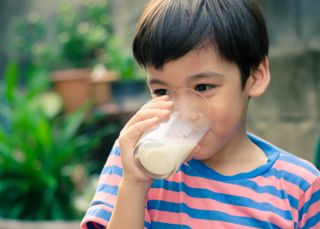 A persistent myth about milk — that drinking it can lead to the production of more gooey mucus in your body's airways — is completely false, a new review finds.

The myth is so persistent that some parents have stopped giving milk to children with chronic respiratory conditions, such as asthma and cystic fibrosis, out of concern that drinking milk might make it harder for their children to breathe. [The 7 Perfect Survival Foods]

But the milk-mucus connection is simply a myth, said review author Dr. Ian Balfour-Lynn, a pediatric pulmonologist at Royal Brompton Hospital in London. And when people take this myth as true medical advice, it could have serious consequences: Not giving milk to children can make it challenging for them to get enough calcium, vitamins and calories, Balfour-Lynn said. Children who don't drink enough milk are also more prone to fractures and shorter stature, studies show.

It's unclear exactly when the milk myth got started. It's possible that it came from Moses Maimonides (1135-1204), a philosopher and doctor who wrote that milk causes "a stuffing in the head." Moreover, traditional Chinese medical texts have linked dairy consumption with "a humidifying effect and thicker phlegm," Balfour-Lynn wrote in the review, which was published online yesterday (Sept. 6) in the journal Archives of Disease in Childhood.

Even the influential "Dr. Spock's Baby and Child Care" book, of which more than 50 million copies have been sold since its publication in 1946, repeats this claim. A 2011 edition of the book states that "dairy products may cause more mucus complications and more discomfort with upper respiratory infections," Balfour-Lynn found while researching the myth.

The myth may persist because of milk's unique properties. Milk is an emulsion, meaning it has droplets of one liquid suspended in another liquid. (In milk's case, fat droplets are suspended in water.) When a person drinks milk, the milk mixes with their saliva.

The sticky compounds in saliva can boost milk's viscosity, or thickness, and volume, Balfour-Lynn told Live Science. The resulting "thickness coating the mouth and the after feel — when small amounts of emulsion remain in the mouth after swallowing" may make people think that drinking milk leads to a sudden spike in mucus, he noted.

Another potential explanation for the myth is that when milk breaks down, it releases a protein that is known to boost the activity of a gene involved in mucus production. But this particular mucus production happens in the bowel, not the respiratory tract, Balfour-Lynn said. [10 Celebrities with Chronic Illnesses]

This mucus could affect the respiratory tract only if the bowel were weakened by infection, which would allow the mucus to travel elsewhere in the body, he said. This wouldn’t happen with a common cold, although it's possible it could affect people with cystic fibrosis, which is sometimes accompanied by gut inflammation, Balfour-Lynn said.

However, small studies dating back to 1948 show that drinking milk is not associated with an increase of mucus in the respiratory tract, he found.

In all, "while certainly the texture of milk can make some people feel their mucus and saliva is thicker and harder to swallow, there is no evidence (and indeed evidence to the contrary) that milk leads to excessive mucus secretion," Balfour-Lynn wrote in the review. "The milk-mucus myth needs to be rebutted firmly by healthcare workers."

The review is an important one because it helps raise awareness that it's perfectly healthy to drink milk while having respiratory problems, said Dr. Corey Wasserman, a pediatrician at Weill Cornell Medicine in New York City, who was not involved with the review.

It's common to hear parents ask about the milk myth during flu and cold season, Wasserman said. She tells patients exactly what this review found — that milk does not increase mucus or phlegm production. In addition, cold milk can help hydrate and soothe the throat of a sick child in need of calories, Wasserman told Live Science.