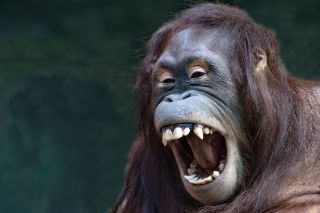 Between verbal jokes, slapstick comedy and tickling, there are numerous reasons we laugh. But are humans the only species with a sense of humor?

The short answer is no, but it also depends on how you define "humor."

For millennia, philosophers and psychologists have struggled to come up with an exact definition for what constitutes as humor. They've presented numerous theories over the years, one of the most popular being the "incongruity theory" of humor. At its basic level, this theory says that humor arises when there's an inconsistency between what one expects to happen and what actually happens — and this includes comedic tools like puns, irony and twists of fate.

Under this definition, the vast majority of animals probably don't have a sense of humor, as they lack the cognitive mechanisms and networks that would allow them to identify such inconsistencies.

One known exception is Koko, the famous western lowland gorilla who understands more than 1,000 American Sign Language signs and 2,000 spoken English words. The clever primate is known not only to use language to humorous effect by playing with different meanings of the same word, but also to understand slapstick comedy — she's reportedly signed the word "chase" after tying her trainer's shoelaces together and made laughing noises at her trainer's clumsiness.

But there are various issues with the incongruity theory of humor and related theories, including the fact that they can't explain how jokes with predictable punch lines are funny and how certain incongruous things aren't funny. They also struggle to account for a prime reason we laugh: Being tickled by a friend or family member.

In recent years, psychologists came up with a different theory. They propose that humor arises from so-called benign violation or "something that threatens a person’s well-being, identity or normative belief structure but that simultaneously seems okay," they wrote in a recent paper about the theory.

Benign violation can explain why a number of things make us laugh, including being tickled: That is, tickling benignly violates someone's physical space. You can't tickle yourself because that doesn't constitute a violation and complete strangers can't tickle you to the point of laughter because you won't see it as a benign act.

Under this theory, various animals do indeed have "humor," if only because they can be tickled.

Research in 2009 showed that our primate relatives — chimpanzees, bonobos, gorillas and orangutans — all produce laughter-like sounds when tickled (as well as when they're wrestling and play-chasing). This suggests that humor and our ability to laugh likely came from humans and great apes' last common ancestor.

And in a follow-up study in 2015, scientists showed that chimpanzees can make silent "laugh faces" just like humans.

Dogs are also known to have a kind of panting laugh and play face that's suggestive of humor.

Interesting, the animal that has gained the most research attention for its ability to be tickled and laugh are rats. When tickled by people or engaged in rough and tumble play (with rats of similar size), the rodents emit long, 50 kHz ultrasonic chirps. They enjoy being tickled so much that they actually chase researchers' tickling fingers.