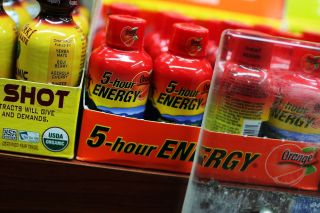 A standard cup of coffee contains around 100 milligrams of caffeine; a Red Bull has 80 mg. But according to the Center for Science in the Public Interest, one caffeinated beverage manages to pack around 200 mg of caffeine into less than 2 fluid ounces (56 milliliters): 5-hour Energy.

So, what would happen if you were to drink five 5-hour Energy shots at once? Would you gain 25 hours of energy? Or would the consequences be more severe?

The answer to what would happen is, "nothing good," said Kathleen Miller, an energy-drink specialist at the University at Buffalo Research Institute on Addictions. Five bottles of 5-hour Energy contain about 1,000 mg of caffeine — the equivalent of the caffeine in 10 cups of coffee. [Does Caffeine Really Dehydrate You?]

"Caffeine can be a great thing, at low doses," Miller told Live Science. "With the consumption of five 5-hour Energy drinks, however, you move past alert and awake, into the territory of jittery, anxious and [heart palpitations]."

True caffeine intoxication doesn't kick in, however, until you reach even higher doses: 5,000 mg of caffeine, or the amount in 50 cups of coffee and 25 5-hour Energy drinks. At these levels, a person will experience the more life-threatening effects of caffeine, including "seizures, strokes [and] hallucinations," Miller said. And yes, caffeine can be deadly at these extreme doses, she added.

While such extreme circumstances are rare, Miller emphasized that the risk of caffeine intoxication is higher in people with existing heart conditions. In 2012, for example, a 14-year-old girl with a heart valve problem diedafter drinking two 24-ounce Monster Energy drinks in 24 hours — together they contained 480 mg of caffeine.

"Chemically, caffeine can deceive your body into thinking it's wide awake when what you really need is sleep," she noted. "This is harmful for young people who need sleep, and for everyone long-term. With repeated use, caffeine can elevate blood pressure and cause prolonged sleep disturbances."

In addition, there are certain plant and herbal extracts in energy drinks that count as "dietary supplements, which are legally exempt from regulation," Miller added. Although these extracts are mostly present in low doses, their effects are unclear and could be potentially harmful, she said.

So, while energy drinks might keep you awake, there's no guarantee that excessive use will keep you healthy.