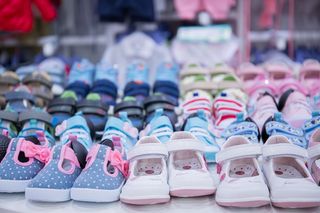 A young girl in the United Kingdom reportedly got an infection and developed sepsis — a potentially life-threatening condition — after going into a store and trying on shoes without wearing socks, according to news reports.

The 4-year-old girl, Sienna Rasul from South Wales, became very ill the day after trying on shoes in bare feet, according to The Sun. She was diagnosed with sepsis — an overwhelming immune response triggered by a bacterial infection — and spent five days in the hospital on intravenous antibiotics.

But can you really get sepsis from trying on shoes barefoot?

An expert told Live Science that this appears to be an extremely rare case; the general public doesn't need to worry about getting such an infection from trying on shoes. "For the vast, vast, vast majority of people, trying on shoes without socks is not going to cause them to get sepsis," said Dr. Amesh Adalja, a senior scholar at the Johns Hopkins University Center for Health Security, who was not involved in the girl's case. [6 Superbugs to Watch Out For]

The exact source of Sienna's infection isn't known, but The Sun reported that doctors told Sienna's mother the girl may have contracted the bacterial infection from shoes; and that a cut or scrape on her foot allowed the bacteria to enter her body.

But Adalja stressed that there's nothing specific about shoes that would put people at risk for such an infection. "There's bacteria in shoes just like there's bacteria anywhere," Adalja told Live Science. So, there's no reason to think that the bacteria came from a shoe. "The shoe is a red herring," he added.

Indeed, it's possible that this infection was already incubating in Sienna's body when she tried on the shoes, Adalja said. (In other words, she may have already been infected but hadn't experienced any symptoms yet.)

In addition, people who develop severe infections often have a genetic or medical predisposition to such infections, Adalja noted, although it's unclear whether there were any specific factors in Sienna's case that put her at risk for sepsis. (The condition is more common in children younger than 1 year and adults older than 65; people with weakened immune systems; and people with chronic medical conditions such as diabetes or cancer, according to the Centers for Disease Control and Prevention.)

But what about the practice of wearing socks when you try on shoes?

"People forget that you live in a world that's completely dominated by microorganisms," Adalja said. "[And] 99 percent of them don't do anything to anybody."

Adalja added that socks "aren’t impervious," and wearing them wouldn't necessarily prevent a rare case like Sienna's from occurring.

If people do have a cut or an abrasion, they should treat it with simple first-aid remedies, Adalja said, and they should keep an eye on it for signs of infection, which can include redness, increasing pain and warmth or swelling, according to the Mayo Clinic.

Sienna has now been released from the hospital but is still being monitored during her recovery, The Sun reported.