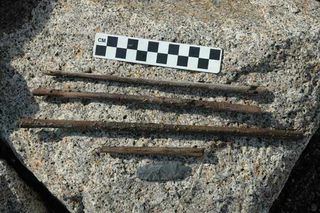 A 270-year-old birch arrow (in four pieces) along with the stone projectile point. These artifacts were found in places where ice patches have melted away in the Canadian Arctic.
(Image: © Tom Andrews)

Warming temperatures are melting patches of ice that have been in place for thousands of years in the mountains of the Canadian High Arctic and in turn revealing a treasure trove of ancient hunting tools.

Ice patches result from layers of annual snow that, until recently, remained frozen all year. As Earth's temperature has warmed in recent decades due to the accumulation of heat-trapping greenhouse gases in the atmosphere, some of the ice patches have begun to melt away, sometimes revealing ancient artifacts to the surprise of archaeologists.

Ice patch archeology is a recent phenomenon that began in Yukon. In 1997, sheep hunters discovered a 4,300-year-old dart shaft in caribou dung that had become exposed as the ice receded. Scientists who investigated the site found layers of caribou dung buried between annual deposits of ice. They also discovered a repository of well-preserved artifacts.

Andrews first became aware of the importance of ice patches when word about the Yukon find started leaking out. "We began wondering if we had the same phenomenon here," Andrews said.

In 2000, he cobbled together funds to buy satellite imagery of specific areas in the Mackenzie Mountains, which form part of the border between the Yukon and the Northwest Territories, and began to examine ice patches in the region. Five years later, he had raised enough money to support a four-hour helicopter ride to investigate two ice patches. The trip proved fruitful.

"Low and behold, we found a willow bow," Andrews said.

That discovery allowed Andrews and his team to get more funds that the team then used to explore eight ice patches in four years. The results have been extraordinary: Andrews and his team (including members of the indigenous Shutaot'ine or Mountain Dene) have found 2,400-year-old spear throwing tools, a 1000-year-old ground squirrel snare, and bows and arrows dating back 850 years.

"The implements are truly amazing. There are wooden arrows and dart shafts so fine you can't believe someone sat down with a stone and made them," Andrews said.

Biologists involved in the project are examining dung in the area for plant remains, insect parts, pollen and caribou parasites. Others are studying DNA evidence to track the lineage and migration patterns of caribou.

The dung and artifacts can be found at these spots because for millennia, caribou seeking relief from summer heat and insects have made their way to ice patches where they bed down until cooler temperatures prevail. Hunters noticed caribou were, in effect, marooned on these ice islands and took advantage.

"I'm never surprised at the brilliance of ancient hunters anymore. I feel stupid that we didn't find this sooner," Andrews said.

Andrews is concerned about retrieving more artifacts, because his funds have run out and two of the eight ice patches have already disappeared.

"We realize that the ice patches are continuing to melt, and we have an ethical obligation to collect these artifacts as they are exposed," Andrews said. If left on the ground, exposed artifacts would be trampled by caribou or dissolved by the acidic soils. "In a year or two the artifacts would be gone."