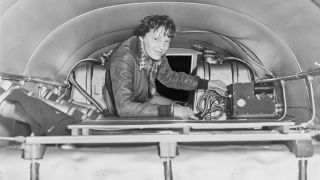 Amelia Earhart checking equipment on her airplane, circa 1937.
(Image: © Shutterstock)

The daring aviator Amelia Earhart may have sent distress calls from a tiny Pacific island by the light of the moon, talking urgently into her radio while she recharged her damaged plane at low tide, according to a new report.

But not everyone is on board with this new idea about Earhart's tragic end.

The scenario rests on a lot of assumptions about how and where Earhart's plane went down, meaning it's highly unlikely it ever happened, said John Little, an assistant curator at the Museum of Flight in Seattle, who was not involved with the report. [Photos: The Incredible Life and Times of Amelia Earhart]

The new report — published online by The International Group for Historic Aircraft Recovery (TIGHAR) on July 24, which would have been Earhart's 121st birthday — focuses on radio distress calls attributed to Earhart after she and her navigator, Fred Noonan, went missing in the central Pacific on July 2, 1937.

Historians have known about these distress calls for years, and many have been dismissed as hoaxes or misunderstandings. Recently, TIGHAR went through the calls and found that 57 of the 120 messages reportedly heard by the public seemed credible. A new analysis of these credible calls, made from July 2 to July 7, 1937, reveals that they happened in clusters during the nighttime hours.

The new report proposes a possible explanation: Perhaps Earhart got lost on her historic attempt to fly around the world and landed her plane onto the coral reef of Gardner Island (also known as Nikumaroro), said study co-author Richard Gillespie, executive director of TIGHAR.

According to the distress calls, Noonan was injured in the landing, but Earhart escaped relatively unharmed, except for an injured ankle, Gillespie said. During the day, the plane was in a precarious location, stuck in the reef where the tide was high, the weather was hot and hungry blacktip sharks were nearby, the new TIGHAR report suggested.

So, it's possible that Earhart went ashore during the day (to seek food and shelter, and to escape the high tides, heat and sharks) and returned at night, Gillespie said. At this time, Earhart would have had enough fuel to run the plane's engine and use the craft's propeller to recharge the batteries so that she could send out distress calls, which TIGHAR calls the "active" periods.

"But if she's parked stationary in a tropical environment," the typically air-cooled engine would overheat, Gillespie said. When the engine got too hot, Earhart would have needed to shut it off to allow it to cool for 60 to 90 minutes, which would explain the "silent" periods between the distress-call clusters, Gillespie told Live Science.

"Dang, it just fit," Gillespie said he remembers thinking. "The Earhart mystery has been solved."

For starters, it's not clear that Earhart and Noonan landed on Gardner Island. This idea is based on the discovery of a castaway's bones and campsite on the island in 1940. A doctor took measurements of the bones and concluded that they belonged to a short and stocky European man.

These bones are now lost to history, but the doctor's notes, which TIGHAR uncovered in 1998, survive. [In Photos: Searching for Amelia Earhart]

TIGHAR previously did a separate analysis showing that Earhart had long arms that matched the castaway's measurements, at least according to photographs of her. But this technique isn't reliable, as it's challenging to determine exact limb measurements from a photograph, Ann Ross, a forensic anthropologist, previously told Live Science.

Some independent researchers do acknowledge that these bones appear to match those of a Caucasian woman, Little said. But even if those bones are Earhart's, it's hard to swallow the coral-landing hypothesis, Little told Live Science.

According to TIGHAR's new report, Earhart touched down with her landing gear down, which then caused the plane to get stuck in the coral reef. But an experienced pilot wouldn't do that, Little said.

"If you're going to be landing on a reef, you are not going to come down with your wheels down. You are going to do a wheels-up ditching," he said. "That's far safer."

If the landing wheels were down, they would have ripped off when they made contact with the reef, and the plane would have pitched over, likely doing a somersault over its nose, Little said. Moreover, the report includes an October 1937 photo that supposedly shows, far in the background, a plane's landing-gear leg embedded in the reef. But if the plane had really wedged that deep into the reef, it would have been impossible for Earhart to start the engine and propeller, even during the night when the tide was low, Little said.

"The problem is that, if you have the aircraft bellied in, there is no clearance for the propellers to run," Little said.

In addition, coral is razor-sharp, so it would have been difficult for Earhart to go to and from the plane during the night and day, Little noted. This issue, and others, could have been addressed if the report had undergone peer review by other researchers, but TIGHAR self-published the piece, Little said.

"One fact that readers should be aware of is that TIGHAR, The International Group for Historic Aircraft Recovery, has been in business since 1972. During those 46 years, they have recovered precisely zero historic aircraft," Little said. "They may be hot on [Earhart's] trail, but we don't know. Until they get better research or publication techniques, it's very difficult to take anything that they claim seriously."

As for Earhart's mystery, the most likely scenario is that she went down into the ocean. "There's nothing mysterious [about it]," Little said. "There's no skullduggery."