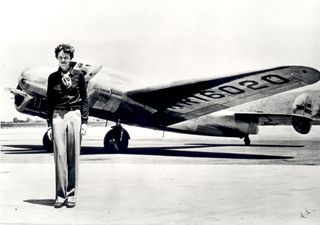 Amelia Earhart, who has a tall, thin body, stands in front of the Lockheed Electra in which she disappeared in July 1937.
(Image: © Science Source/Getty Images)

In arguably one of history's biggest mysteries, the disappearance of Amelia Earhart has captured both public and scientific attention since that fateful day in 1937 when the Coast Guard lost radio transmission with Earhart's airplane on its way to Howland Island, just north of the equator in the Pacific Ocean.

Earhart and her navigator, Fred Noonan, were attempting to circumnavigate the globe. They were never heard from again. This week, a paper published in the journal Forensic Anthropology suggests that bones found on the Pacific island of Nikumaroro (once called Gardner Island) in 1940 may belong to the lanky female aviator.

"This analysis reveals that Earhart is more similar to the Nikumaroro bones than 99% of individuals in a large reference sample. This strongly supports the conclusion that the Nikumaroro bones belonged to Amelia Earhart," study author and forensic anthropologist Richard Jantz wrote in the journal article. [10 Mysterious Deaths and Disappearances That Still Puzzle Historians]

Jantz is part of an effort launched by The International Group for Historic Aircraft Recovery (TIGHAR) in 1988 to find Earhart's remains.

Since 1988, Richard Gillespie, TIGHAR executive director, has led TIGHAR researchers on 11 expeditions in the hope of finding clues as to what happened to Earhart. One idea is that Earhart and Noonan made an emergency landing on Nikumaroro, in the Republic of Kiribati, and subsequently died there. Earhart's plane is also missing. In 2014, TIGHAR researchers found an "anomaly" on the seafloor off Nikumaroro, though there's no word on what created that anomaly.

Though the actual bones have not been found, scientists have records from a Dr. D. W. Hoodless, who apparently examined the 13 bones in Suva, Fiji, in 1941, after they were shipped to him at the Central Medical School. In his notes, Hoodless concluded the bones belonged to a European male who was about 5 feet 6 inches — much shorter than the 5-foot-9 Earhart, according to an NPR report from 1998. (In his paper, Jantz indicates Earhart was perhaps 5 feet 7 inches or 5 feet 8 inches tall.)

Figuring out whether these bones could have belonged to Earhart, or even a female, has been a long back-and-forth scientific journey. In 1998, forensic anthropologists Karen Burns and Richard Jantz analyzed the medical record and images of Earhart to conclude that "the morphology of the recovered bones, insofar as we can tell by applying contemporary forensic methods to measurements taken at the time, appears consistent with a female of Earhart's height and ethnic origin," according to a TIGHAR statement. [In Photos: Searching for Amelia Earhart]

That interpretation was disputed in 2015, when British graduate student Pamela Cross and Australian anthropologist Richard Wright published a paper in the Journal of Archaeological Science: Reports arguing that the bones likely belonged to a stocky European male, as Hoodless had initially suggested in his 1941 description.

In response to that rebuttal, Jantz (Burns died in 2012) undertook a more thorough examination of the Nikumaroro bone measurements and how they compared to Earhart's physique. Preliminary results were released in 2016 that suggested the bones did match what images of Earhart suggested of her body size, Live Science reported at the time.

Closer to the truth?

In the newly published study, Jantz describes his analysis, which included newfound information about Earhart's body dimensions based on a study of her clothes that were held at Purdue University in the George Palmer Putnam Collection of Amelia Earhart Papers. Jantz measured an inseam length and waist circumference from a pair of Earhart's pants. He also used various images (particularly those with bare arms and legs), a Massachusetts driver's license and other records to estimate Earhart's build.

He concluded that, "in all respects," the bones are consistent with those of Earhart. "As a tall and narrow-bodied female, the 'set' of the femora could well have appeared male to Hoodless," Jantz wrote. "It is apparent from the many photos of Earhart, and from her waist circumference, that her hips were narrow for a female. This, in combination with her height, does not require a femur angle one might expect of a female."

In addition, Hoodless had used half of a pubic bone as part of his sex determination: The spot where the pubic bones meet in the middle is an arch — known as the pubic arch — and forensic anthropologists use the angle of that arch to determine the sex of a skeleton. Women, who on average have wider hips than men, have a bigger angle at the top of that arch. One problem with his measurement, however, is that he had only one side of that bone (and arch), which makes figuring out the actual angle, especially with the tools available in 1941, tricky, Jantz noted in his paper.

"An ambiguous half subpubic angle," Jantz wrote, "could easily have been called male by an inexperienced eye, or even an experienced one, particularly if taphonomic [fossilization] processes had modified the morphology."

Even with this finding, other narratives abound. For instance, as reported by The Washington Post, retired journalist Mike Campbell, who has studied Earhart's disappearance, continues to argue that the Japanese captured Earhart and Noonan, believing them to be spies, on the Marshall Islands. Campbell, who authored "Amelia Earhart: The Truth at Last " (Sunbury Press Inc.; Second Edition, 2016), maintains the duo were tortured, only to perish in Japanese custody.

Last year, the History channel ran a special on a photo they had unearthed that the channel suggested showed Earhart and Noonan. They claimed the image showed Earhart after she had been taken hostage by the Japanese in the Marshall Islands. Experts immediately refuted that claim, citing the biggest giveaway of all: The photo was taken at least two years BEFORE Earhart's final, fateful flight.