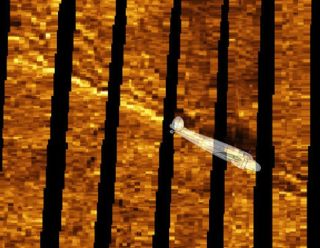 A sketch of Amelia Earhart's plane is overlaid on top of this sonar image.
(Image: © TIGHAR)

The hunt for Amelia Earhart's lost plane will continue next summer.

An underwater "anomaly" detected off the coast of the tiny Pacific atoll Nikumaroro could be the wreckage of Earhart's aircraft, as it is the right size and in the right location, according to the International Group For Historic Aircraft Recovery (TIGHAR).

In June 2015, the group plans to sail a research vessel to Nikumaroro for a a 24-day expedition to investigate the anomaly with a remotely operated vehicle (ROV), while divers will search the surrounding reef for other possible bits of wreckage; meanwhile researchers on foot will scour the island for remains of a possible campsite. [The 9 Craziest Ocean Voyages]

The discovery of the aircraft could put to bed one of the greatest mysteries of the 20th century. Earhart disappeared in 1937 along with her navigator Fred Noonan during an attempt to fly around the world. The pair headed east from Oakland, California, in a modified twin-engine Lockheed Electra 10E. All communication was lost with the duo during one of the final legs of their  journey, en route to Howland Island in the Pacific. They were last seen in Lae, New Guinea.

Theories about Earhart's fate abound. Some say she was captured and executed in Saipan. Another less glamorous theory posits that she survived but assumed a fake identity and started a new life in New Jersey. TIGHAR has favored a castaway theory, suggesting that Earhart and Noonan made an emergency landing on the reef of Nikumaroro (once called Gardner Island). The group has pointed to evidence like lost distress calls and the 1940 discovery of a partial skeleton to support the idea that Earhart and Noonan may have survived on the island for some time while waves washed the aircraft down the slope of the underwater reef.

The new expedition was prompted because of a shard of aluminum.

When Earhart stopped in Miami at the beginning of her 'round-the-world voyage, she had a window on her plane replaced with a shiny aluminum patch. More than two decades ago, a piece of debris was found on Nikumaroro, an uninhabited island, which is part of the nation of Kiribati. Members of TIGHAR recently concluded that it could have been the repair patch on Earhart's aircraft.

"We're going to proceed on the assumption that we have a piece of that airplane," Ric Gillespie, executive director of TIGHAR, told Live Science.

Gillespie and his colleagues think the aluminum shard is another reason to keep searching for Earhart's plane around Nikumaroro. The underwater anomaly was detected by sonar off the coast of Nikumaroro during an expedition in 2012. At a depth of about 600 feet (183 meters), that underwater blip is well beyond the reach of typical SCUBA divers. That's why the TIGHAR team will instead deploy an ROV.

The group has said the expedition, dubbed Niku VIII, will cost less than $500,000.