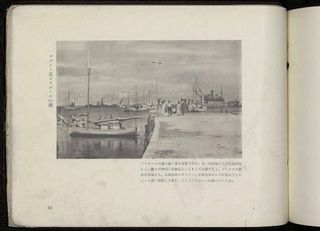 A photo unearthed by History channel researchers does not in fact depict Amelia Earhart, the famous aviator who went missing in 1937 while she was trying to become the first woman to fly around the world, nor does it show her navigator, Fred Noonan, according to Earhart historians.

History channel researchers had claimed the image showed Earhart after she had been taken hostage as a suspected spy by the Japanese, who had a military presence in the Marshall Islands, where the photo was taken.

One dead giveaway? The date the photo was taken. A Japanese military blogger noted yesterday (July 11) that the picture — uncovered in the U.S. National Archives by Les Kinney, a former U.S. Treasury agent — was actually taken at least two years before Earhart's final flight.

The blogger, who goes by @baron_yamaneko on Twitter, found the recently rediscovered photo in a book published in 1935, NPR reported. The History channel said it was aware of the finding, and would investigate further, according to NPR. [Photos: The Incredible Life and Times of Amelia Earhart]

The blogger isn't the only skeptic. Last week, experts interviewed by Live Science expressed concerns about the photo's validity. For instance, it was impossible to verify the identity of the woman sitting on the dock because her face was turned away from the camera, said Ann Ross, director of the Forensic Sciences Institute at North Carolina State University.

"A frontal view would be necessary for a good image comparison," Ross said.

"The more we learn about this photo, the worse it gets," TIGHAR representatives wrote in an online post on July 7.

For instance, the ship in the background isn't the Japanese Koshu, as some had claimed, towing Earhart's plane, but rather a smaller ship, "and whatever is behind it is just an indistinct blob," TIGHAR representatives wrote. What's more, there are no soldiers in the photo, which would be expected had the Japanese captured Earhart as a suspected spy, TIGHAR representatives wrote.

Also, the clothes worn by the "Earhart" and "Noonan" figures don't match those in previous photos taken before the duo took off on the historic flight, and the woman who resembles Amelia has hair that was longer than the famous pilot's, TIGHAR representatives wrote. As for Noonan, although facial recognition software showed that his hairline and nose matched the man in the photo, it was a poorly done evaluation: The photo used to match Noonan was flipped, meaning that his hair part doesn't match the hairline of the man on the dock, TIGHAR representatives wrote.

These analyses burst the theory that the photo depicts Earhart and Noonan, but the search for the pair continues. Working under the assumption that the fliers crash-landed on an island known as Nikumaroro in the Pacific Ocean, TIGHAR and the National Geographic Society are working together with search dogs to find human remains, Live Science previously reported.