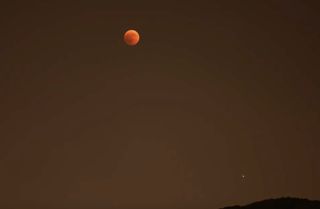 With totality lasting for an incredible 1 hour and 43 minutes, this eclipse clocked in only 4minutes shorter than the longest possible such event calculated by astronomers. The duration let viewers from around the globe view the phenomenon, with skywatchers gathering at observatories across the totality zone and those with unlucky geography tuning in to livestreams.

The unusually long duration of the eclipse was caused by a few different celestial factors. The moon was near its farthest point from Earth and orbiting slowly, making it appear smaller and take longer to travel through Earth's shadow. In addition, Earth was near its aphelion, the point in its orbit farthest from the sun, making its shadow appear larger. [Blood Moon 2018: Longest Total Lunar Eclipse of Century Occurs July 27]

The eclipse officially began at 1:14 p.m. EDT (1714 GMT), according to NASA, and the moon slowly crept into Earth's shadow and began first to darken, then redden.

But the real show started at 3:30 p.m. EDT (1930 GMT), when totality began, and the moon was fully ensconced in Earth's shadow.

Because of the timing, daylight meant skywatchers in North America and most of South America missed seeing the phenomenon in person. But astronomers armed with telescopes around the world shared their views and their enthusiasm.

"On the left, you have the marvelous amazing Colosseum, at least a detail, and the rest of the scenery is just showing the moon," Gianluca Masi of the Virtual Telescope Project said during the organization's livestream of the event, which shared the view of a telescope located at the ancient Roman Forum. "Look, friends, this is honestly amazing," he added shortly before totality began.

"It's impossible to keep these emotions in sight because this experience is so huge," Masi said shortly after the time of greatest eclipse.

The lunar eclipse is only half of the day's celestial spectacle: Skygazers also get an incredible view of a bright Mars, which is in opposition today.

Earthlings will next see a total lunar eclipse on Jan. 21, 2019, and unlike today's event, that eclipse will be visible to North American viewers.