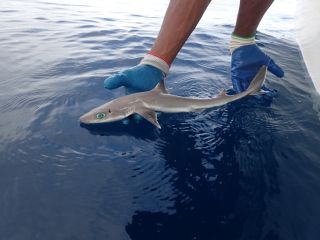 Florida scientists have just discovered an adorable, big-eyed species of dogfish shark, and the little creature looks like a mash-up of an alien and an anime character.

The newly identified species, Squalus clarkae, or Genie's dogfish, is named after the marine biology pioneer Eugenie Clark. It slinks around in the deep waters of the Gulf of Mexico and the western Atlantic Ocean. The sharks' monster peepers may look alarming, but these animals are relatively small, typically spanning no more than about an arm's length, from 20 to 28 inches long (50 to 70 centimeters).

The new species was previously categorized as Squalus mitsukurii, a dogfish species native to Japan. However, genetic tests and detailed analysis of the creature's physical features revealed that S. clarkae is distinct from its Japanese relative. [Images: Weird Deep-Sea Sharks]

The life history of the more than 20 species in the Squalus group is still a mystery to scientists, but researchers fear the shark population is threatened by deep-sea commercial fisheries that capture the sharks incidentally as bycatch.

"This type of research is essential to the conservation and management of sharks," Mariah Pfleger, lead author and marine scientist at Oceana, an ocean-conservation nonprofit and advocacy organization, said in a statement. "The first step to successfully conserving these species that live in deeper waters, like Genie's dogfish, is finding out what is down there in the first place."

The researchers published their description of the new species today (July 17) in the journal Zootaxa.