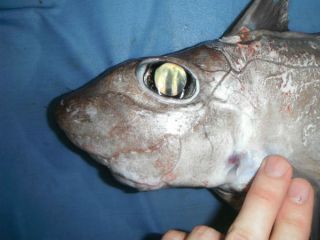 A ghost shark. In the place of teeth, the fish have wide bony plates, lending them a goofy mouth shape that resembles that of a bucktoothed rabbit.
(Image: © Paul Clerkin.)

A two-month fishing expedition to the Indian Ocean has turned up hundreds of strange deep-sea sharks, and several are likely new to science.

Clerkin joined the commercial fishing venture in March and April of this year, in hopes that the vessel's massive trawling nets might pluck sharks from the deep sea. He was not disappointed.

"I tell people I have a ton of sharks, and they keep thinking I’m joking," Clerkin said. "It was an actual ton. I brought back 350 sharks." [See some of the sharks]

The sharks were caught as bycatch from depths of approximately 6,500 feet (2,000 meters) from a region of undersea mountains, or seamounts, about a week's journey south of the island of Mauritius.

Day after day, the ship's nets brought up dozens of bizarre sharks from the deep — some dainty, some enormous, nearly all of them rare or entirely new species.

"They don’t look like the classic great whites you'll see on Shark Week," Clerkin said. "I think they're more interesting." Weird features abound: knifelike snouts, moonlike eyes and at least one shark with a curved, serrated spine emerging from its back.

Among the largest was a false catshark, a pointy-faced fish about 10 feet (3 m) long. Although it's a known species, it's a notoriously elusive one.

"It was exciting because I knew they were really rare, and the chance of seeing them was pretty small," Clerkin told OurAmazingPlanet. Yet after a while, he said, he began to think the species isn't nearly as rare as the literature suggests.

"We actually caught a lot — close to 35," he said, adding that it's likely humans simply haven't explored the parts of the ocean where false catsharks live. "I think it shows there's a lot we don't understand about sharks," he said.

Clerkin is taking between 80 and 90 measurements from each shark, a time-consuming task, and is also sending off genetic samples for comparison.

If the any of the species are indeed new, Clerkin gets to name them. He said he'll likely name some of the sharks for his science mentors. "And maybe I'll name one after my mom," he said.